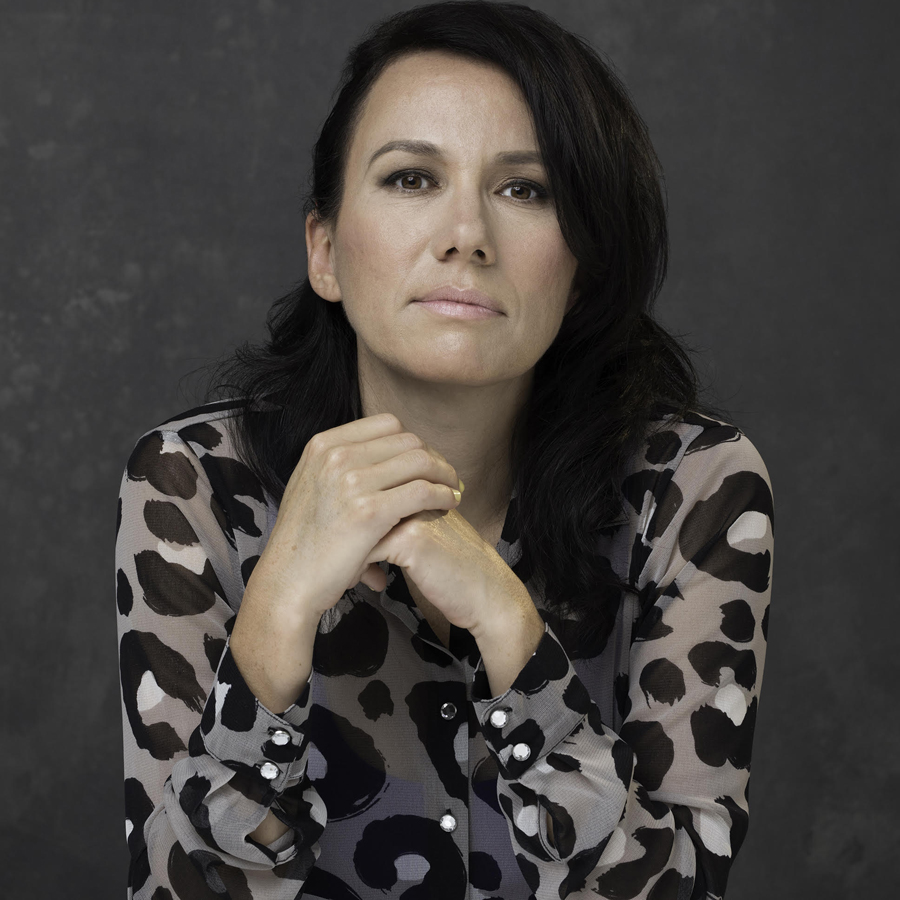 Canadian Cree-Métis filmmaker Danis Goulet received a gala presentation for her film, Night Raiders, at TIFF this year, not to mention being honoured with the fest’s Emerging Talent Award. Zoomer spoke with Goulet about the importance of representation and the burgeoning genre of Indigenous sci-fi.

When Cameron Bailey — artistic director and co-head of the Toronto International Film Festival — called Danis Goulet to tell her that her film Night Raiders would receive a gala presentation at this year’s festival, the Cree-Métis filmmaker found herself at a loss for words.

“Uh, really? We’re a gala? Like, are you sure? Us? Like, our film? Like, we’re a gala?'” Goulet laughs as she recounts her reaction to the news during a recent phone interview in Toronto.

The Saskatchewan-born Goulet, 44, who now resides in Toronto, could be forgiven for struggling to find the appropriate words. Though an accomplished and award-winning writer-director of numerous short films — not to mention she’s also served as artistic director of the imagineNATIVE Film + Media Arts Festival and as a programmer for TIFF — Night Raiders is her first feature-length movie. And in addition to receiving a gala for it, she’s also the recipient of the 2021 TIFF Emerging Talent Award.

“I really share it with the Indigenous screen community,” Goulet says of the success she’s enjoyed at TIFF this year. “I feel like we’re in a huge moment right now and this community has been such a source of strength and inspiration for me. And I feel like they have gotten me and kept me going through really challenging times.”

Night Raiders is set in a dystopian future in which Canada has joined the United States, and a massive military complex has outlawed children living free. Instead, all kids are taken to special schools to be re-educated into citizens — and military fighters — of the state. Within that world, a Cree mother named Niska (played by Canadian actress Elle-Máijá Tailfeathers, of the Kainai First Nation) joins with an underground band of fellow Cree vigilantes to attempt to rescue her own daughter, Waseese (Brooklyn Letexier-Hart), and countless other Indigenous children before it’s too late. The group believes Niska is the saviour they’ve been waiting for — a Cree stranger from the north who will come and deliver their community from the oppressors.

The film is rife with symbolism, representing everything from colonial suppression to residential schools. There’s even a virus outbreak — a storyline conceived by Goulet months before anyone had ever heard of COVID-19 — that the writer-director based on the smallpox outbreak that wiped out many Indigenous communities.

“Everything in the film was directly taken from real historical events and policies that were inflicted,” Goulet explains. “So there’s, in fact, nothing fictional in the film. But that’s just it — the genre allows you to sort of bring all of these things together. And it is certainly a daunting endeavour, but it’s also just a super exciting challenge.”

The genre Goulet refers to is the burgeoning Indigenous sci-fi field. Goulet first experimented with it in 2013 with her award-winning short film Wakening  — which screened at both TIFF and the Sundance Film Festival that year. The film shares story elements with Night Raiders in that it centres around a dystopian, military-occupied future. But it incorporates two specific Cree folk figures — Wesakechak (the wanderer) and Weetigo (a cannibalistic monster), who must find each other and team up to combat their occupiers.

Goulet found the freedom that the Indigenous sci-fi genre afforded “really opened up exciting possibilities to talk about what I wanted to talk about. And in a way, when you’re not confined by strict reality or a straight up genre, you can almost hit your message as hard as you want because you have the freedom of a more fictionalized world to work in.”

In addition, for Night Raiders, Goulet found inspiration in the ongoing Idle No More movement to protect Indigenous rights and land in Canada, as well as from attending the Standing Rock pipeline protests in North Dakota.

“The youth had so inspired me to tell the story about love and resistance. When I was witnessing Idle No More and many other resistance movements … I wanted to give something back that I felt like they would want to watch and that they would be really excited to watch,” Goulet says. She adds that the Indigenous sci-fi genre, “also offers a layer of protection when you are talking about heavy subject matter … something about being in another time and place just offers a layer of removal that is really helpful in the telling of these stories.”

The Idle No More and other Indigenous resistance movements also influenced another element of Night Raiders — the fact that it’s a female-led film. In addition to the mother-daughter tandem at the core of the film, the Cree camp leader and the main camp elder are also women.

“To me, it was so important to portray the way that women have led, in so many ways, both within Indigenous resistance movements, but also in the screen community that I’ve been so lucky to be a part of.”

“There are so many amazing women in our screen community, but also the matriarchs in resistance movements sometimes go overlooked. And I did start writing this around the time of Idle No More, and that was started by four Indigenous women on the Prairies. And so I wanted to reflect the importance of their role in resistance.”

Goulet has discussed, in the past, her hesitance to incorporate elements of traditional Indigenous stories — “the oral stories that we know and love and have grown up with around the fireplace, but I think are maybe disregarded by the rest of Canada” — into her films because those outside the Indigenous communities may find them “quaint and folkloric.” But with Wakening, and now Night Raiders, she’s embraced those elements and made them a central part of her storytelling.

“To me,” she says, “these [traditional Indigenous stories] are the classics of this land. But I wanted to portray those stories with gravity and power.”

Making Wakening changed her views on the matter, as Goulet notes that, at the time, her focus was on social realism in her films. “So to then go and make a monster movie just felt like a total pivot into something new. I just kind of dared myself and treated it like an experiment and the results were really surprising about the way that you could take a whole bunch of different aesthetics and create a world … I knew that I wanted to stay in that space for my first feature.”

Goulet believes that filmmaking is a natural extension of the Indigenous oral storytelling tradition. But before she incorporates those elements into her films, she always employs a pivotal element of research: sitting down with her father.

Goulet doesn’t speak the Cree language, but  it’s her dad’s first language. So she sits with him and listens intently as he discusses entire concepts and philosophies. “So it’s like you’re tapping into something because, within our Indigenous languages, there are entire universes. And the language is so beautiful and it’s so poetic.”

She notes that the opportunity to incorporate what she learns from her father into her development process for a film “is so meaningful to me and it’s such a gift and it just helps me think about the story in different ways.”

For many Indigenous artists in Canada, being confronted with offensive and even racist scenarios is all too common in the film and television industry. Celebrated Métis actress Tantoo Cardinal, for example, shared with Zoomer in 2018 a story about how, in her early years as an actress, she saw white actors painting their skin to play First Nations or Indigenous characters.

Goulet, too, has her own stories, like the time in 2002 when she was working as a casting director for the pilot of an American television series and was tasked with finding “​​a Pocahontas type” for a role. She also recalled, during our interview, another instance, when a film she was making was two weeks out from production when the broadcaster notified her that they didn’t want the Cree language used in the film. “I just was stunned by that,” she says, “especially because the themes of the film were about cultural revitalization.” As a result, she stood her ground and refused to make the film any other way “And so in my heart of hearts, I had to be willing to walk away in order to do it the way that I wanted to do it.”

She says that, when she got involved with imagineNATIVE, “it just opened my eyes to a world of indigenous film — but to the larger, broader public, I think we still felt invisible. And when we would go into industry spaces, at that time it very much was like still trying to convince people to cast an Indigenous person for an Indigenous role, which seems like such a crazy conversation now.”

Goulet herself helped author a report about the lack of Indigenous feature film production in Canada “maybe five or six years ago” and says that, “I talked to so many filmmakers that told me heartbreaking stories about the racism or the ignorance that they had experienced in the industry.”

Decades of advocacy, she says, finally began opening doors. “It feels like there’s much more openness and there’s so many Indigenous stories being told.” She points to the creation of the Indigenous Screen Office and the Indigenous funding stream at Telefilm as examples of initiatives that have helped greatly increase Indigenous representation on screen in Canada.

“We always knew the talent was there. We said, ‘Just give us the opportunity and the resources and amazing things will happen,’” Goulet explains. “And we’re really seeing this wave now. And it is just such an incredible time after so many years of pounding the pavement. Which isn’t to say that the barriers aren’t still there — there’s a lot of work to be done. But we have to celebrate the victories as well.”

Goulet’s TIFF Emerging Talent Award comes on the heels of filmmaker Tracey Deer, who hails from Quebec’s Kahnawake Mohawk Territory, receiving the honour last year. And Goulet was joined on the awards stage this year by Abenaki filmmaker Alanis Obomsawin, 89, who received the Jeff Skoll Award in Impact Media as well as a celebratory retrospective of her work at the festival.

And not only do more Indigenous filmmakers and artists have an opportunity to have their voices heard today, but the work they’re creating helps to spotlight the struggles Indigenous people have faced in this country for centuries.

“I think there has been a narrative created in this country about Indigenous people,” Goulet says. She points to Canada’s residential school system, where “children were killed and beaten and neglected and abused. And then there was a narrative created that we are the savages. It’s just kind of unbelievable.”

As such, Goulet says she has “always been driven to counter those narratives about us.”

She hopes that Night Raiders allows viewers to “see the humanity of these characters and they empathize in that universal struggle of what it is to be connected — that love between a parent and their child.

“I just hope it builds empathy and understanding for the impact of these colonial policies on Indigenous families.”

Night Raiders is available for a digital second screening at TIFF on Sept. 17, and an in-person screening on Sept. 18. Following TIFF, the film hits theatres on Oct. 8. Click here for more information.