“It’s Quite Shocking, Really”: Kate Bush On How ‘Stranger Things’ Revived Her Hit “Running Up That Hill” 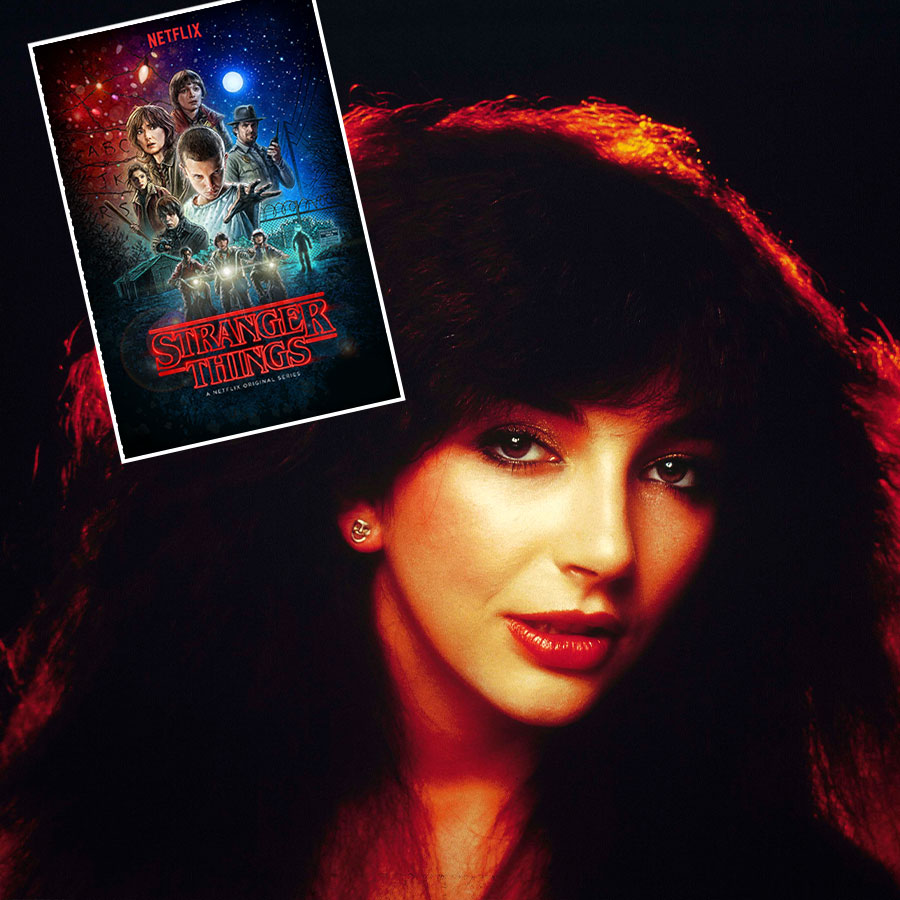 The hit tune "Running Up That Hill" by Kate Bush, seen here in the '80s, broke three U.K. chart records after it was featured in the new season of the hit Netflix series 'Stranger Things'. Photo: RB/Redferns/Getty Images; Inset: 'Stranger Things' key art courtesy of Netflix

You might say that stranger things have happened. And for British singer-songwriter Kate Bush, it led to a resurgence in popularity for her 1985 single “Running Up That Hill” as the tune enjoys a second week atop the U.K. singles charts.

The 63-year-old, who rarely grants interviews, appeared on the BBC Radio 4 show Woman’s Hour on Wednesday and spoke about how the song, which was used in the fourth season of the hit, 1980s-set Netflix series Stranger Things, has gained new life among the show’s Gen Z fan base that wasn’t even born when the song originally came out.

“It’s just extraordinary. I mean, it’s such a great series, I thought that the track would get some attention, but I never imagined that it would be anything like this,” said Bush. “It’s so exciting. It’s quite shocking really, isn’t it? The whole world’s gone mad.

“What’s really wonderful,” she added, “is this is a whole new audience who, in a lot of cases, they’ve never heard of me and I love that. The thought of all these really young people hearing the song for the first time and discovering it is, well, I think it’s very special.”

“Running Up That Hill” features most prominently in the fourth episode of the show’s fourth season, which dropped in late May, with the character of Max (Sadie Sink) eventually escaping the evil clutches of a demo-creature called Vecna and reuniting with her friends (you can watch the scene in the video below), with its help. And as ET Canada noted, “the song has some significance for the storyline, and becomes increasingly important as the episodes progress.”

“I think they’ve put it in a really special place,” Bush said during her Woman’s Hour interview. “I thought, what a lovely way for the song to be used in such a positive way. You know, as a kind of talisman almost for Max. And yeah, I think it’s very touching, actually.”

The song’s resurgence culminated with it topping the U.K. singles charts last week, while breaking three chart records in the process. The first saw Bush surpass Cher as the oldest female music artist to ever hit the No. 1 spot across the pond. Cher achieved the feat in 1998, at age 52, with her hit single “Believe.”

Cher tweeted her congratulations to Bush, writing, “Bravo Kate Records Are Meant 2 Be Broken‼️ Remember Back In The Day, When Women Had SHORT SELL BY DATES!? We Had 2 Fight Our Way Through The Testosterone Curtain, & We Did it So The Girls Who Came After Us Could Sing As Long As They Want To. With Mega Respect”

Bush also set the record for longest time between U.K. number one singles with 44 years — her last chart-topper was her 1978 debut singer “Wuthering Heights” — edging out previous record-holder Tom Jones, who’d gone 42 years. As well, at 37 years between the release of “Running Up That Hill” and it hitting No. 1, Bush surpassed Wham!’s record of longest time between a song’s release and topping the chart. The Wham! classic “Last Christmas” had gone 36 years between its release and landing at the top spot.

Following its use on Stranger Things, “Running Up That Hill” also hit No. 1 in Australia, Belgium, Ireland, Lithuania, New Zealand, Sweden and Switzerland. The song reached the No. 2 spot on the Canadian charts and placed fourth on the U.S. Billboard Hot 100, which the BBC noted marks Bush’s “first-ever appearance in the Billboard top five.”

“Running Up That Hill” was originally released in 1985 as the lead single from Bush’s album Hounds of Love, topping out in the third spot on the U.K. charts at the time. It was remixed for the closing ceremonies of the London 2012 Summer Olympics, landing it on the U.K. charts again, in sixth position.

Bush is also a three-time nominee for the Rock and Roll Hall of Fame, so one has to wonder if the resurgence of “Running Up That Hill” may be enough to finally nudge her into that institution.

And while Bush has largely retreated from the public spotlight, her renewed popularity tracks with numerous female musical superstars who originally gained fame in the 1970s, ’80s and early ’90s and are still rocking out. That includes Stevie Nicks, Blondie, Joan Jett, Alanis Morissette and Mary J. Blige, all of whom are touring in 2022.

As well, in March of this year pop superstar Harry Styles received an endorsement from one of his heroes — Canadian musical legend Joni Mitchell — after the 78-year-old retweeted a tweet that announced the name of Styles’ new album, Harry’s House, and added, “Love the title.” The title echoes the name of Mitchell’s own 1975 tune “Harry’s House/Centerpiece,” and Styles himself has long professed his love of Mitchell’s music.

And, of course, the following month Styles joined another Canadian music superstar, Shania Twain, 56, on stage for a duet on two of her biggest hits, “Man! I Feel Like a Woman!” and “You’re Still the One.”

Between the Lines: Stevie Nicks on Aging & the Best Way to Listen to Music