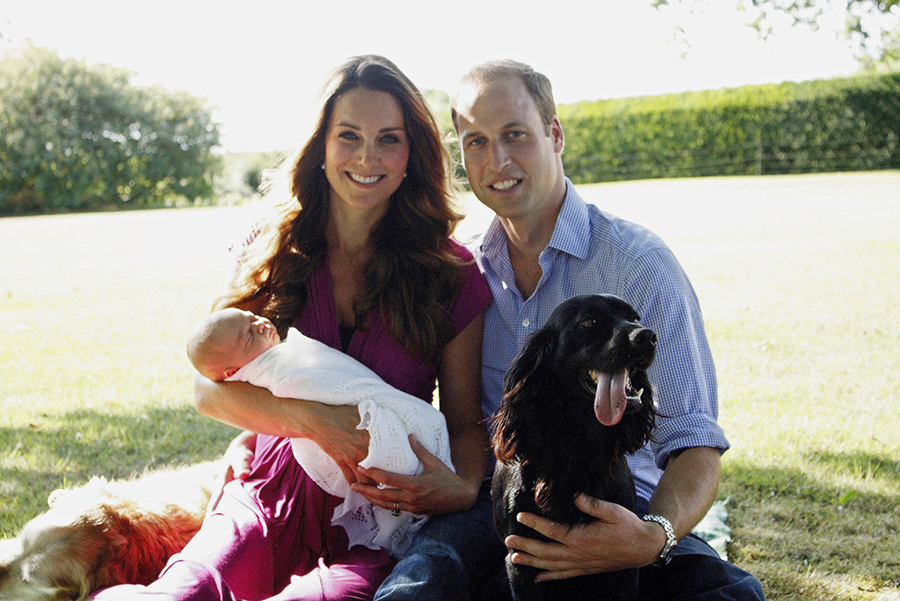 Lupo appears in a 2013 family photo along with newborn Prince George shot in the garden of the Middleton family home in Berkshire, England. Photo: Michael Middleton/WPA Pool/Getty Images

The Duke and Duchess of Cambridge and their three children are grieving the loss of their beloved nine-year-old pet, Lupo. Sharing a picture of their black English cocker spaniel, the royal couple wrote on Instagram: “Very sadly last weekend our dear dog, Lupo, passed away. He has been at the heart of our family for the past nine years and we will miss him so much. – W & C.” Lupo, who became part of the Cambridge family back in 2012, several months after William and Kate’s wedding, would go on to take a starring role in photographs alongside the royals, including one of the first official portraits of Prince George (above).

In 2014, Lupo became the subject of a children’s book called Lupo and the Secret of Windsor Castle, a royal romp involving wicked traps and stolen treasure, but at its heart, the story of the loyal bond between the dog and baby Prince George.

Lupo was part of the litter born to Ella, the dog of Kate’s parents Carole Middleton and Michael Middleton. Kate’s brother James Middleton, 33, shared a touching tribute to Lupo on social media, writing “It is with great sadness that Lupo, the beloved dog of my sister Catherine and her family has passed away. Lupo was the son of Ella, brother to Zulu, Inka & Luna.

“Nothing can ever prepare you for the loss of a dog. For those who have never had a dog, it might be hard to understand the loss. However for those who have loved a dog know the truth: a dog is not just a pet; it is a member of the family, a best friend, a loyal companion, a teacher and a therapist.

“For most, the loss of a dog is, in almost every way comparable to the loss of a Human loved one,” he went on, saying that “the news about Lupo brought a wave of emotions flooding back” from when he lost his first dog in 2017.

“There isn’t much of a rule book on how to grieve for a dog, but I’ve said a prayer, lit a candle and taken Ella (Mum) for a long walk to spend time remembering Lupo. Rest in peace Lupo. Tilly & Mini will be waiting for you. You will always be remembered and your legacy will live on forever. Good Boy 🐾.” Before the Duke and Duchess had children, Lupo — whose name comes from the Italian word for wolf — was invited into their Kensington Palace home to help ease Kate’s loneliness when William was about to head to the Falkland Islands for a six-week-long Royal Air Force (RAF) deployment.

“When Prince William was away in the Falkland Islands, he went for dinner with some good friends of ours in the Air Force, and he was saying how difficult it was for Kate because he was leaving for six weeks. It was when they’d just got the Spaniel to help her with the time apart,” said Natalie Bressani, who was a guest at a 2018 Christmas party at Kensington Palace for RAF families.

All the Queen’s Corgis

Dogs have long been valued members of the British royal family. Queen Elizabeth, famous for her love of dogs, began to breed her beloved corgis at Windsor Castle in the 1950s and has owned more than 30 of them. She was given her first corgi, Susan, when she was 18, and even took her on her honeymoon with Prince Philip. Since then, her canine friends have accompanied her on tour, and were featured in her 90th birthday portrait. Her dogs also delighted royal fans when they made a surprise appearance in the 2012 James Bond London Olympics Sketch.

While Her Majesty’s last corgi, Whisper, died in October 2018, she still has two corgi-dachshund crosses.

Prince Harry and Meghan Markle also share a love for dogs. When Meghan moved to the U.K. in 2017 following the couple’s engagement, she brought her rescue dog, a beagle named Guy, with her. Her other dog, Bogart, was reportedly too old to make the transatlantic journey, and was taken in by a friend in Toronto.

Since this time, she and Prince Harry have adopted another dog, a black Labrador named Pula. The Sussexes’ pups were spotted recently in the background when Meghan took part in a video conversation with feminist icon Gloria Steinem.

Prince Charles and Duchess Camilla are proud parents of a pair of Jack Russell Terriers, named Bluebell and Beth, rescued from the animal welfare organization Battersea Dogs and Cats Home, for which Camilla is royal patron.

Prince Edward, the youngest child of Queen Elizabeth and Prince Philip, has two dogs in his royal household, a black Labrador and a cocker spaniel.

12 Famous and Lovable Dogs From Movies and TV