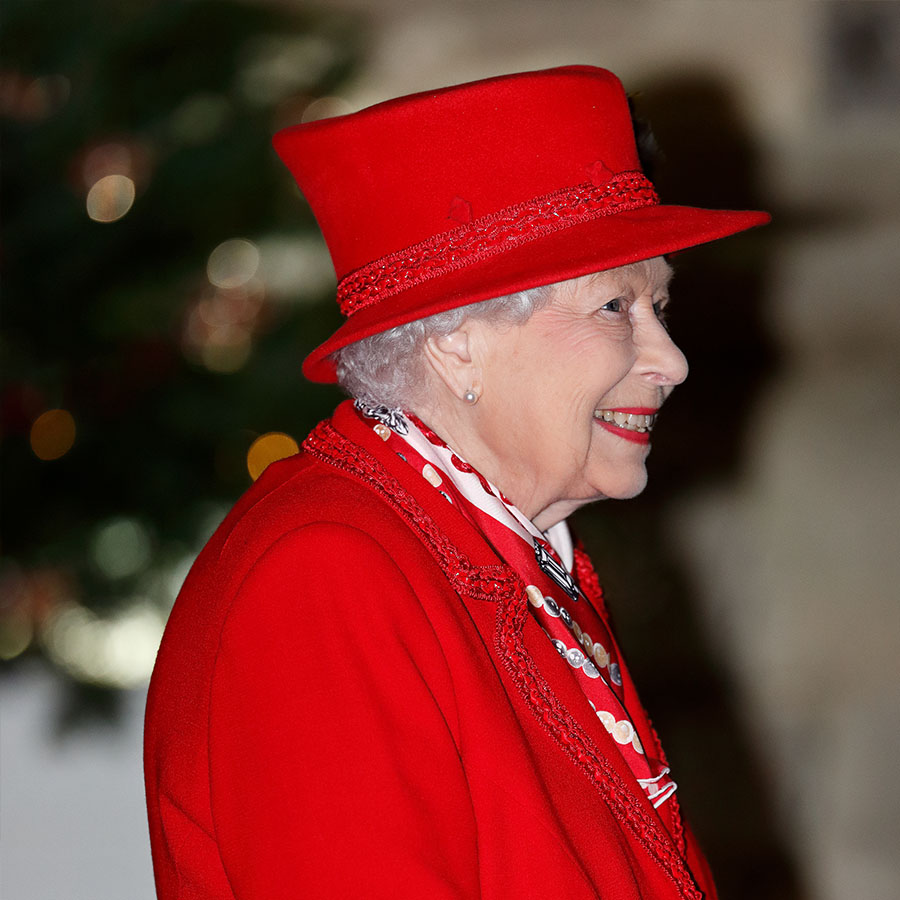 Lifting British spirits, royals joined together to sing Christmas carols and to show their gratitude for key workers and volunteers during the COVID crisis. Photo: Max Mumby/Indigo-Pool/Getty Images

Queen Elizabeth II, sporting a festive look with a vibrant red overcoat and a matching hat, hosted a Christmas carol event earlier this week to thank front-line workers and volunteers for their efforts during the coronavirus pandemic.

Maintaining social distancing protocols, she was joined by children Prince Charles and his wife, Camilla, Princess Anne, Prince Edward and his wife, Sophie, as well as grandson Prince William and his wife, Kate, in the open air Quadrangle at Windsor Castle on Dec. 8. Prince Philip, 99, was not in attendance, causing some concern among royal watchers.

The Salvation Army band kicked off the event with a rendition of “Hark the Herald Angels Sing” and “The First Noel” with Her Majesty singing quietly along. And in a touching moment, as she turned to make her way back to the castle, William was heard calling out, “Bye, Gran.”

This is the first time the Royal Family has all been together since the March 9 Commonwealth Day service at Westminster Abbey, which was also the last official appearance of the Duke and Duchess of Sussex as royals. While some of the family have visited separately since then, they’ve refrained from larger gatherings due to COVID-19 guidelines for sheltering in place. Prince Charles contracted the coronavirus in March, and Prince William also tested positive just after his father, although his diagnosis was kept secret at the time.

Unlike previous years, the Royal Family will not spend the holiday season together at Sandringham;  instead, the monarch and Prince Philip will celebrate Christmas quietly at Windsor, where they have been isolating for most of the year.

This week’s festive event at the castle also marked the last stop of William and Kate’s three-day tour across the U.K. to pay tribute to different groups of people for their efforts in the response to the coronavirus. The royal couple left Euston on Sunday evening for a 1,250-mile trip across England, Scotland and Wales aboard the nine-carriage royal train, considered the family’s most expensive form of transportation.

So as to not attract crowds amid the pandemic, the itinerary for the tour was kept under wraps.

In just a few of the many highlights of the trip, the Duke and Duchess of Cambridge were greeted by bagpipers playing Christmas songs when they arrived in Edinburgh on Monday morning. At an engagement at the Scottish Ambulance Service in Newbridge, they praised first responders for their untiring work during the pandemic. They then crossed the border to Berwick, where they met with primary school children who, in the spirit of the season, wore reindeer headdresses.

And on Tuesday, according to Hello UK, the couple also visited the Royal Berkshire Hospital, where Kate was born on Jan. 9, 1982. The chair of the hospital’s foundation, Graham Sims, reportedly joked, “Welcome back” as the Duchess arrived.

While their trip provoked criticism from ministers in both the Scottish and the Welsh governments for not adhering to pandemic travel restrictions, the U.K. government supported the trip, with Prime Minister Boris Johnson releasing a statement that he backed the royal couple while calling the tour a “morale boost.”