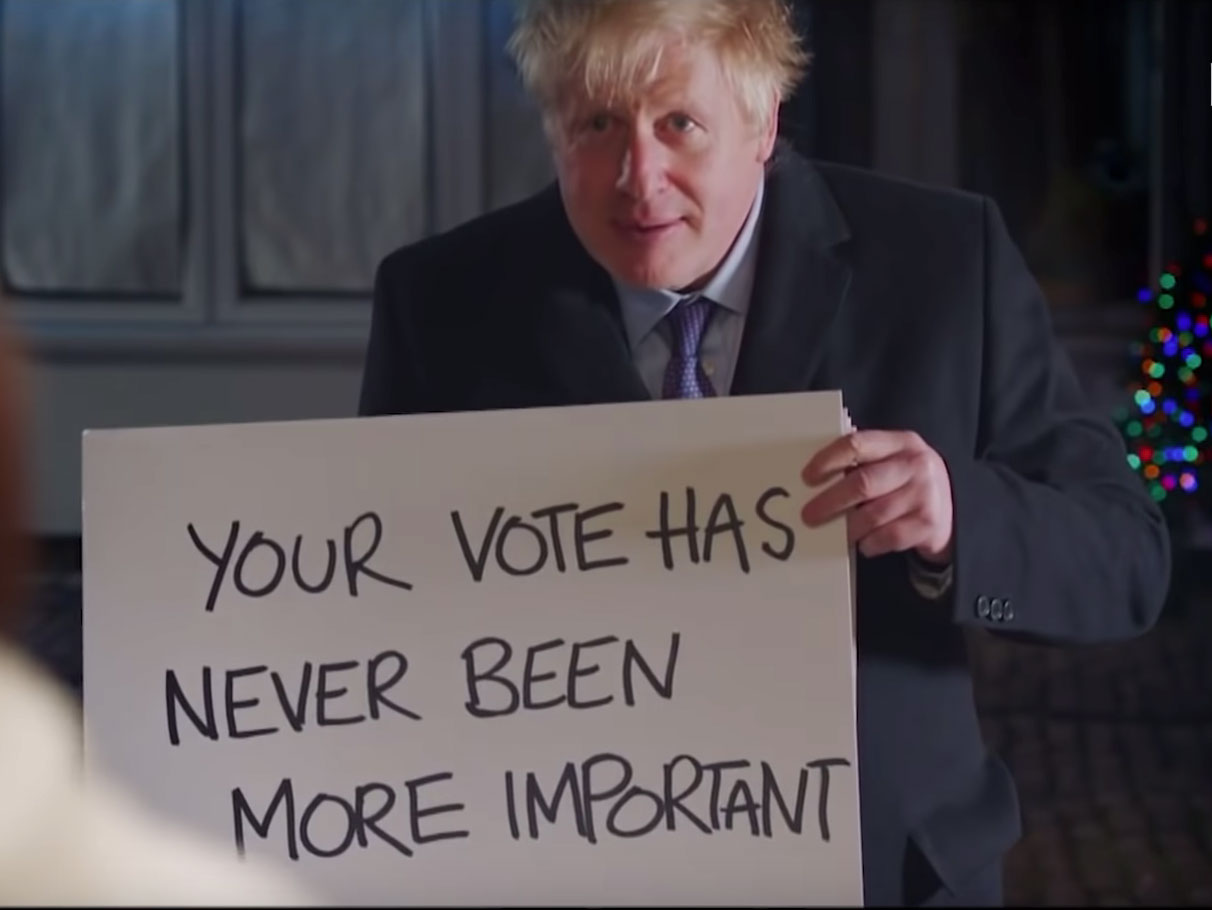 It’s quite a show across the pond where Brits will vote in a general election on Thursday. Tousled Tory leader Boris Johnson is fighting to stay on as Prime Minister, having inherited the hot mess that brought about the downfall of his predecessor, Teresa May.

It’s all about Brexit, with Johnson wanting to extricate Britain from the European Union, while Jeremy Corbyn’s left-wing Labour Party wants to put the brakes on it. But that’s just the big picture.

There’s another picture, too — an actual picture, a movie. It’s Love Actually, starring Hugh Grant as a British Prime Minister who falls for a junior member of his staff at 10 Downing Street, one of many  intertwined love stories featuring an ensemble cast of British actors.

The frothy 2003 rom-com set in London a month before Christmas is right up there on some people’s lists of beloved holiday movies. It’s also a favourite, it seems, of the real British Prime Minister.

Johnson riffed on the movie for his latest campaign video, spoofing the scene where Mark (Andrew Lincoln) woos his girlfriend (Keira Knightley) by holding up a series of white cards to send a message of love.

Watch the campaign ad below

In his election video, Johnson woos voters by holding up a series of white  cards to send a message of leave.

While most people thought the video parody was hysterical, the actor who played the Prime Minister in Love Actually was not amused.

Hugh Grant is a diehard Remainer and active campaigner, knocking on doors and advising people to vote strategically to defeat the Conservatives, who are favoured to win the election according to the latest polls.

Grant is thoroughly disgusted by Johnson and the Tory push for Brexit.
In August, the 59-year-old actor memorably described Johnson in a tweet as an “over-promoted rubber bath toy” and a “weak little Narcissus.” So when Johnson had the chuztpah to steal a scene from the movie where Grant plays the Prime Minister, Grant fired back.

Grant told BBC Radio that Johnson had failed to include an important message from the scene. “I did notice that one of the cards from the original film which he didn’t hold up was the one where Andrew Lincoln held up a card saying, ‘Because at Christmas you tell the truth.'”

He added, “I just wonder if the spin doctors in the Tory party thought that would be a card that wouldn’t look too great in Boris Johnson’s hands.”
Grant managed to get in another dig, too, alluding to reports about Russians contributing to Tory coffers in support of Brexit and the disruption of Europe.
He said, about the campaign video, “I thought it was quite well done, very high production values, but clearly the Conservative Party have a lot of money — maybe that’s where all the rubles went.”
Watch the Love Actually scene below

Grant’s high profile electioneering has not gone unnoticed on this side of the Atlantic. “The actor, who is best known for rendering exquisitely the many stages of a diffident British person in the process of making up his mind and then, f–k it all, following his heart, has decided to get involved,” observed the New Yorker this week.

Meanwhile, Grant claims he has no party affiliation. “I’m not anything. What I am is a bloke in a panic about the precipice we stand on in this country and I don’t think this general election is like any other we’ve had in this country,” he said in a speech to Labour supporters Sunday in the Sussex riding of Crawley. “The situation is grave. I have five children and I’m worried for them. I think I have to do everything I possibly can to stop the country from falling over the edge of that precipice.”

The Brit benefitting most from all this election malarkey and precipice panic is neither a politician nor an actor. It’s got to be Prince Andrew, who’s enjoying a brief respite from the spotlight after spending weeks on the front pages due to his past friendship with convicted sex trafficker Jeffrey Epstein.

Hugh Grant, 58, Says He’s “Too Old and Ugly and Fat” to Still Star in Romantic Comedies