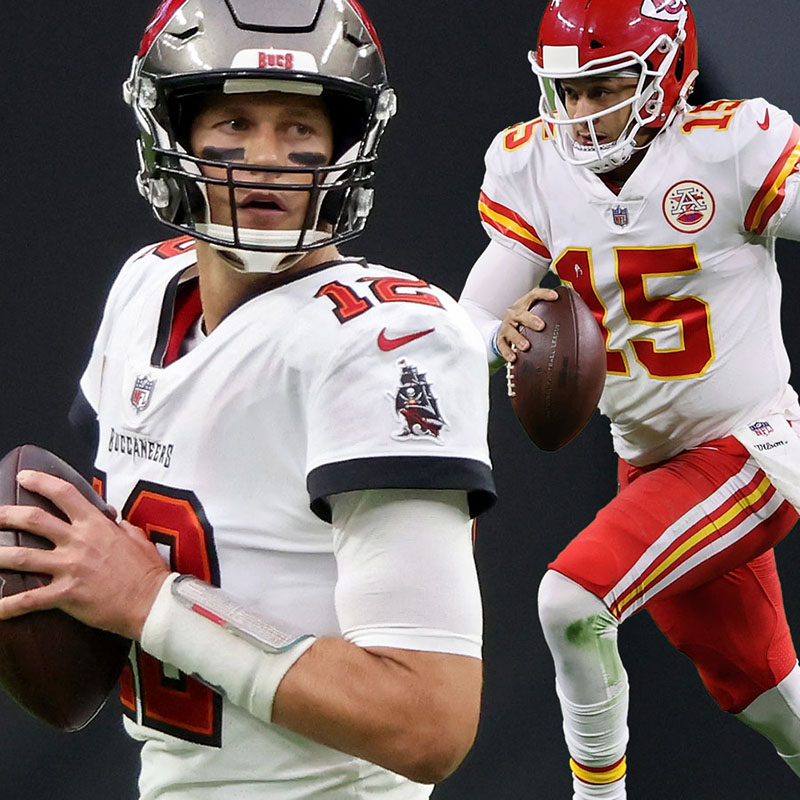 While the result of this year’s Super Bowl largely rests on whether the Tampa Bay Buccaneers’ defence can shut down the Kansas City Chiefs’ high-octane offence, the story that’s capturing all the headlines is the generational battle between the game’s two superstar quarterbacks.

Tom Brady, the age-defying 43-year-old and universally declared quarterback GOAT (Greatest of All Time) versus Patrick Mahomes, the 24-year-old wunderkind who, everyone agrees, is the next in line to assume Brady’s mantle.

Beyond being billed as a matchup between a living legend and his heir apparent, Brady and Mahomes have essentially become avatars of the generational social upheaval that’s being played out not only in the football field but in political arenas, workplaces, media and entertainment.

And because they’re meeting in the Super Bowl, the NFL is following its time-honoured tradition of indulging in superlatives and blowing up every small detail into massive cultural significance.

According to the NFL, the game is not only a match against the two top teams but it’s also  plugged as a generational battle pitting the legend versus the challenger, age versus youth, old-school tradition versus youthful exuberance.

It almost seems as if the hard-working, experienced and savvy Brady represents everything the older generation expects in a quarterback. Mahomes, on the other hand, reps the upstart millennials, filled with youthful energy, anxious to push the old guard to the sidelines and have the limelight entirely to himself. (There’s even an underlying subtext of race involved – Brady, the quintessential white quarterback defending his crown against Mahomes, the very best of the many Black and multi-racial QBs who, after many years of being shut out of that position, are making their mark in the game.)

If we buy into the marketing hype, Sunday will be an epic tilt between two generational quarterbacks. It’s the Facebook generation against TikTok, SUVs against electric vehicles, Main Street against Amazon. Or, as an ubiquitous social media meme would have it:

Living Up to the Hype

While this buildup to any Super Bowl is always tediously excessive, this is one actually has a chance of living up to its billing.

That’s because rarely in any sport do you get the opportunity to see two of the biggest names, with all their inherent star power, actually line up to play against each other. Imagine the excitement in Canada if Gordie Howe faced off against Wayne Gretzky in the Stanley Cup finals. What if we got to see Michael Jordan match his talents against LeBron, or Jack and Tiger walking up to the 18th hole on the final day of the Masters. Unfortunately, the careers of these leading men didn’t overlap.

You not only have two of football’s greatest in the same game but the contrasting styles of the two quarterbacks adds to the drama.

On the one hand, there’s Brady, who somehow continues to put off the impairments of age and perform at an extraordinary level on the field. His career accomplishments speak for themselves: he has led his team to six Super Bowl victories (Mahomes was in kindergarten when Brady won his first in 2002), four Super Bowl MVPs and holds a plethora of records.

His attention to detail and obsession with health (he goes to bed early and rigorously follows his TB-12 regimen of stretching, hydrating and nutrition) has transformed him into perhaps the greatest 40-plus athlete of all time. He attributes much of his success on and off the field to his ability to “create a version of me at 40 which I think is a lot better than me at 22.”

And while Brady may not have the same zip he once had on his throws (he threw three interceptions against the Green Bay Packers in the Conference Championship last week), his enthusiasm and intensive study of the game remain undiminished. His trademark abilities to read defences, keep cool under pressure and get the ball downfield haven’t deserted him over the years. And his traditional drop-back style and perfect throwing motion hearkens back to the great quarterbacks of yesteryear, like Johnny Unitas, Joe Montana or Bart Starr.

But if Brady is the expert tactician, then Mahomes is the artist, the innovative disruptor. Revolutionizing the position before our very eyes, Mahomes can pierce through any defensive scheme by either throwing or running. His preternatural ability to find receivers while under intense pressure from 300-pound linemen is unmatched in today’s game. And unlike Brady, who moves his team inexorably toward the goal line in a machine-like manner, Mahomes does everything with flair. He darts through defenders, executes trick plays and brings fans out of their seats with dashing genius and artistic panache that have never been part of Brady’s game.

Watch Brady’s reaction after leading his team to a touchdown. After a short celebration, he’s all business, walking to the sidelines to talk to his offensive co-ordinator and plan the next offensive series. Mahomes, on the other hand, celebrates his scoring plays with the exuberant verve of youth. He dances and flexes with teammates, punches the air, points to the heavens and poses for the cameras – all while displaying an ingenuous smile that suggests even he can’t believe just how good he is.

The two may be separated by almost 20 years  and have vastly different styles, but that doesn’t mean they don’t respect each other. Brady says he admires Mahomes’ “poise, athleticism and mental tools” while Mahomes humbly refers to his opponent as “the best.”

Above all, the unifying trait both QBs share is their unquenchable desire for victory. “Brady wants to win,” says Mahomes. “I feel like I have the same mentality. I just want to win no matter what happens or how it happens.”

Unfortunately, only one quarterback can win on Sunday. And while I’ll quietly be cheering for Brady to win just one more for the old guys, reality suggests that Mahomes’ time has come. The burgeoning star is simply oozing confidence and, fully aware of his powers, he’s brimming with assurance that no defence can stop him.

There’s nothing Brady would like better to go out there and prove to doubters that he’s still got it and that that age isn’t a barrier to performing well and winning Super Bowls.

But, like everyone else, he’s also witnessing the meteoric rise of Mahomes. And by his comments and respect for the young phenom, you get the sense that Brady is preparing to pass the torch of greatness to Mahomes and finally accept the wisdom of English author George Borrow: “Youth will be served. Every dog has his day, and mine has been a fine one.”