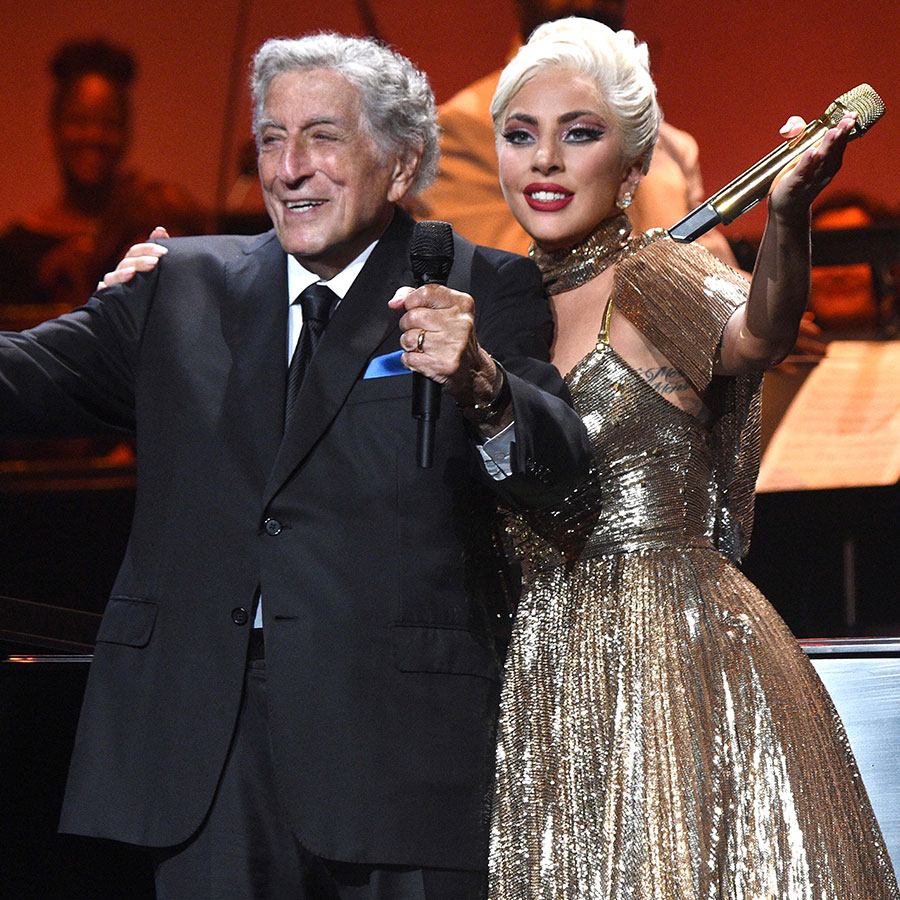 The concert, which consists of footage from two shows taped at Radio City Music Hall in August that coincided with Bennett’s 95th birthday, also marks the final live performance of the legendary crooner’s career following the revelation of his battle with Alzheimer’s disease, which his family disclosed in February. During the interview, Gaga held back tears as she discussed her love and admiration for Bennett — with whom she recorded the Grammy-winning 2014 duets album, Cheek to Cheek.

“I love Tony so much. He is my musical companion,” Gaga, 35, explained. “He is a remarkable human being. He served our country. He also marched with Dr. Martin Luther King Jr. He used to sneak Duke Ellington into the back of hotels to play jazz music all night long. His commitment to civil rights and to humanity is something he has taught me from a young age to take with me in all that I do.”

Gaga added that, “I love him very deeply and watching him begin his journey with Alzheimer’s years ago — I remember, I wanted to make good on a promise I made to him.”

That promise came about when Gaga called Bennett after Cheek to Cheek topped the album charts in 2014 — an accomplishment that made Bennett, then 88, the oldest artist to score a No. 1 disc ever. Gaga noted that, during the call, all Bennett was concerned about was his idea that they should record an album of Cole Porter songs together, which she agreed to do.

“And then a couple of years later, his Alzheimer’s just started to set on and I said ‘Lets go into the studio now.’ And we did,” she said, noting the fulfillment of that promise. The album of Cole Porter songs, Love For Sale, dropped in September.

Gaga got choked up, though, when she discussed the effects that music has had on Bennett during his Alzheimer’s battle. “When jazz begins, this man lights up in a way that is such magic. It just reminded me that anybody that has a family member or somebody that they love that’s suffering from Alzheimer’s or dementia — music is magic. Music is a miracle.”

Gaga’s experiences with Bennett, and witnessing how music still moves him, also tracks with the numerous findings in recent years that tout the power of music therapy, as well as nostalgic tunes, in treating people suffering from Alzheimer’s disease and other forms of dementia.  And earlier this year, when Bennett’s family revealed his Alzheimer’s diagnosis (which occurred in 2016), the singer’s neurologist, Dr. Gayatri Devi, told AARP that she recommended he continue to perform — which he still does at home, two times a week for 90 minutes — because “it kept him on his toes and also stimulated his brain in a significant way.”

Gaga, meanwhile, also shared a clip of her performance with Bennett during the One Last Time concert, performing the Cole Porter tune “Anything Goes.”

“It was easier for Tony to sing songs that he knew with me a little bit before his Alzheimer’s set on,” she explained. “But it’s amazing — the whole night we sang songs also that were new [and] his short-term memory was still there.”

Also on Tuesday, the album Love For Sale received six Grammy nominations, including Record of the Year (“I Get a Kick Out of You”), Album of the Year, Best Pop Duo/Group Performance, Best Traditional Pop Vocal Album, Best Engineered Album, Non-classical, and Best Music Video. And, as the Los Angeles Times noted, Bennett is now the second-oldest Grammy nominee ever (behind blues musician Pinetop Perkins, who won a Grammy at 97) and the oldest to ever be nominated in a “general field” category (which includes both Record of the Year and Album of the Year).

Gaga reacted to the news on Instagram, sharing an image of herself and Bennett with a caption thanking the Recording Academy for the nominations.

“I am stunned and shocked and beyond grateful. I don’t know what to say. I just keep crying and am utterly speechless. This means so much to me, @itstonybennett, the Bennetts, my family, jazz music, and the great Cole Porter who wrote all these timeless classics.”

She added that, “I’ll never forget today and congratulating Tony on his 6 nominations. I’ll never forget that today he could track every word I was saying and understood the world was celebrating him and celebrating jazz – a genre that embodies the joy, abundance and imagination of Black music throughout history.”

Then, Gaga concluded by explaining how Bennett had the idea for the album and it was the fulfillment of the promise she made to him to do the album together.

“At 95 years old, he has more nominations than ever, I’m so honored to be his companion in music and his friend,” she wrote. “Thank you to the public for loving us, we surely love each other, and you. Believe in love and partnership, even with 60 years between us, and Alzheimer’s, there is nothing like the magic of music. I love you Tony, and the world loves you too. How could they not? ❤️”

Tony Bennett Turns 95: Ahead of Hitting the Stage with Lady Gaga on His Birthday, Revisiting Our Conversations with the Legendary Crooner