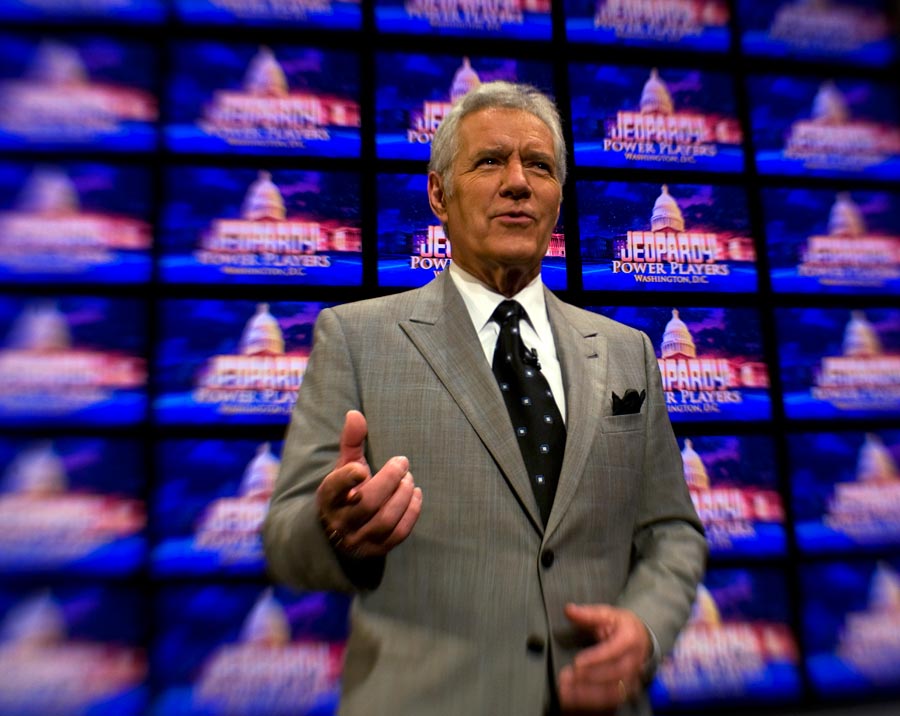 Alex Trebek poses on the set of his game show Jeopardy on April 21, 2012. Mr. Trebek was in Washington for his 'Jeopardy! Power Players Week' shows which were being filmed inside DAR Constitution Hall. (Photo by Tracy A. Woodward/The Washington Post via Getty Images)

Jeopardy! host Alex Trebek has been very positive — and very public — about his pancreatic cancer diagnosis.

Since sharing the news in an online video back in March, the Canadian-born TV personality hasn’t missed a day of work, including hosting for current champ James Holzhauer who recently earned his 28th win, putting him well over the $2 million mark. With a weekly audience of 23 million viewers, Jeopardy!, the top-rated quiz show on television is celebrating its 35th anniversary season.

And, despite being admittedly fatigued by treatment, he continues to make appearances including one in Ottawa earlier this month for the official opening of Canada’s Centre for Geography and Exploration,

When asked by the CBC’s Rosemary Barton why he chose not to cancel, he was resolute. “Unless you’re dead, if you’ve made a commitment to an important group, an important association — and The RCGS is certainly that — and a lot of people are counting on you, a lot of people are coming here because they expected me to be here,” he answered. “Unless I’m dead I’m coming.”

At the time of diagnosis Trebek, 78, was already in Stage 4; the cancer had spread. Late diagnosis like this is common and one of the reasons pancreatic cancer has one of the lowest survival rates of all cancers. In Canada, on average, only about eight per cent of people diagnosed with it will survive five years.

“Fifty per cent of patients are at Stage 4 at the time of diagnosis. And that’s a function, and we don’t know why, of the fact that pancreatic cancer likes to travel early — often before it presents with symptoms that are local,” says Dr. Rachel Goodwin, an oncologist at Ottawa Hospital.

“If we had local symptoms as with, say, colon cancer; it bleeds so you pick it up and usually you pick it up early. But with pancreas cancer, unfortunately, it doesn’t even have to grow that big and it’s already travelling. So 70 or 80 per cent of patients already have advanced disease by the time they’re diagnosed.”

Why Late Diagnosis is Dangerous

“If you take a patient who develops symptoms early and they’re still doing well as apposed to someone who ignores symptoms for a very long time — losing weight, in lots of pain — their performance status is better. That is, how well they can tolerate treatment. Even if they’re both Stage 4, probably the burden of the disease is going to be higher in the second patient and that impacts ability to treat well.

“Pancreatic cancer diagnosis usually occurs in your 70s. We don’t know why but age is a risk factor. And for elderly people there’s also “comorbidity.” It’s always easier to treat a patient who doesn’t also have a chronic disease such as heart disease, kidney disease, smokers disease, COPD, bronchitis, any of those things. Cancer hits the elderly but so do all these other things.”

Not All Pancreatic Cancer is the Same

“Pathology means everything to us. So the most common of all pancreatic cancers is one called adenocarcinoma and it does tend to be the most aggressive. That would be the one that Patrick Swayze had.

“Nobody that I work with knows exactly what Alex Trebek has. There’s nothing out there and I bet that part will remain private. There are other subclasses of pancreatic cancer; one being a neuroendocrine class that starts in a different cell type in the pancreas. It’s still a pancreatic cancer — it can still travel — but often they’re not as aggressive. Patients do well longer. That’s the one that Aretha Franklin and Steve Jobs had.”

Trebek did tell Barton that a mutation was detected in his cancer and that, in addition to chemotherapy, he may receive immunotherapy. It’s one of the newer treatments used in pancreatic cancer, Goodwin confirms.

“The mainstay of Stage 4 treatment is chemotherapy. And it’s usually double it or triple it. In other words, the chemotherapy cocktail would have two or three drugs in it. Then, and this is the tricky part for pancreas cancer, we’re trying to find subcategories where other treatments make a difference.

“And the other thing that sometimes happens is that your innate immune cells get turned on against the cancer but then the cancer tricks them into turning off. There are other drugs under immunopharmacology that turn them back on and keep them on.”

“There’s a Canadian initiative that started in 2018 called EPPIC (Enhanced Pancreatic Cancer Profiling for Individualized Care), started by the BC Cancer Agency. So they’ve developed a program where the first time I meet a Stage 4 patient, we’ll do a new biopsy and it will go on to be molecularly profiled. So it’s a big gene panel where they analyze the sample for different mutations. I still carry forward with my patient, in terms of whatever chemo I want to give, and they follow the patient forward in time to see how they did.

“So after maybe 100 patients they’ll be able to come up with these signatures and as soon as we hear that it’s a certain one, we can say, ‘They do a lot better with, say, platinum-based chemotherapy than any other type.’

“What it’s helping me do right now is have peace of mind that I’m not missing some major oncologic driver that would want me to switch my treatment plan.

“For oncology moving forward, it’s going to be these smaller subclasses that you find more effective treatment for.”

Goodwin says studies into screening the general population for pancreatic cancer has shown it does not help. But efforts are being taken to identify high-risk groups, like those with family history, so they can be monitored.

But she says there also needs to be a focus on educating people about the warning signs.

“So the clear one that most patients know they need to get medical attention for is jaundice. That would be a presentation that the cancer is obstructing some of the pancreas and liver ducts.

“Earlier things would be maldigestion; abdominal pain and cramping with bloating, especially about an hour after you eat. And persistently. I tell patients, any cancer-related pain is usually persistent — not something that comes and goes.

“Also new diabetes, especially in older individuals with no family history of diabetes. The pancreas makes insulin and so when cancer becomes involved in the pancreas, it can’t do its normal function and make insulin and control your sugars — if that function is not being kept up then they can turn diabetic.

“And new pancreatitis, inflammation of the pancreas. If someone is diagnosed with it they need to make sure that they get proper imaging to rule out a mass on the pancreas.

“And the other thing is losing weight for no reason. That’s a red flag for cancer overall.”

To read more about the signs and symptoms of pancreatic cancer, click here.