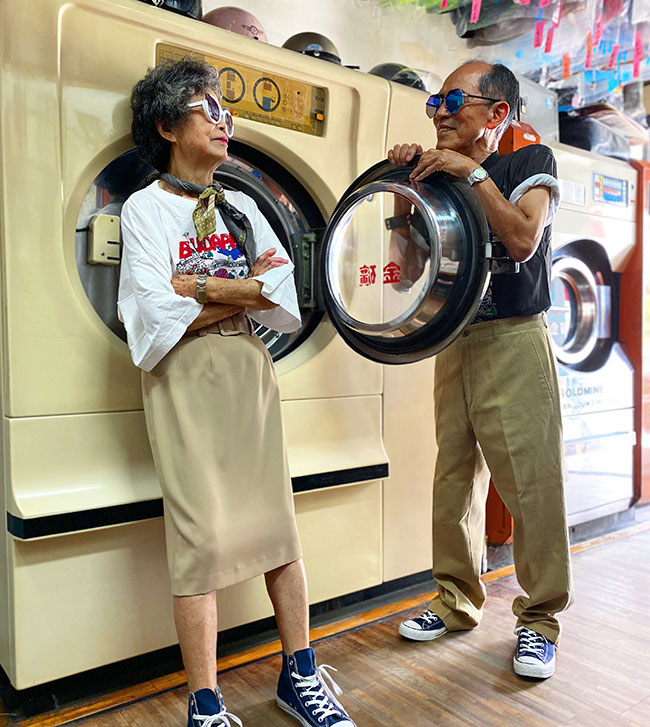 To celebrate Instagram's 10th anniversary, we're revisiting some of our favourite accounts that celebrate aging, including a pair of laundromat owners who found Instagram fame modelling curated outfits from hundreds of forgotten items. Photo: Reef Chang

It’s been 10 years since we were introduced to Instagram, and the photo-sharing app is hardly showing its age — or anyone else’s for that matter.

After a decade, the Gram is still at the top of its game with more than one billion monthly active users, 71 per cent of which are under the age of 35. Of course, its young membership comes as no surprise: from influencers promoting unhealthy beauty standards to wrinkle-smoothing filters, the platform can feel like an unwelcome environment for the older cohort.

However, if you sift through the abyss of immaculate faces and poorly disguised advertisements long enough, you just might find a few accounts that rage against the anti-aging machine —a few wrinkles that refused to be ironed out, if you will.

Just recently, TV host and activist Sir David Attenborough joined the social networking giant at the age of 94 in hopes of raising awareness of climate change and set a new record for the shortest time to reach one million followers — racking them up in just over four hours to best Jennifer Aniston’s previous record.

Of course, Attenborough isn’t the only one skewing the app’s demographics and collecting followers along the way. So in honour of Instagram’s 10th anniversary, we’re revisiting some of our favourite users on Instagram who carve out a space of their own and celebrate aging.

In July, we found the Instagram account for Chang Wan-ji and Hsu Sho, a pair of octogenarian laundromat owners in Taichung City, Taiwan who were modelling hundreds of garments left behind by absent-minded customers. The page is the brainchild of their grandson Reef Chang, who thought the unofficial modelling gig would give his grandparents something engaging to do while the pandemic kept them indoors.

“They had nothing to do,” Chang told the New York Times back in July. “I saw how bored they were and wanted to brighten up their lives.” Since then, restrictions have loosened and what was once meant to be a distraction has transformed into something else all together. Most recently, Chang took to the page, which now has nearly 660,000 followers, to announce his grandparents’ first-ever runway show at Taipei Fashion Week in Taiwan’s capital city.

Try This On, Grandpa

Anyone willing to spend their hard-earned money on designer clothing are usually overprotective of their clothing, but when boredom got the better of fashion-obsessed Naoya Kudo during a weeklong visit to his grandfather Tetsuya last year in Akita Prefecture in Japan, he decided to put his expensive wardrobe to good use.

After dressing his grandfather in a variety of high-fashion labels and sharing them to his own Twitter account, the post quickly went viral and soon led to a dedicated Instagram account. The shoots, featuring Tetsuya wearing coveted brands including Givenchy, Martin Margiela and Off White, have earned the duo more than 150,000 followers to date. Tetsuya, a former teacher, isn’t just placating his grandson either. Kudo says his grandfather contributes plenty to the overall feel of the shots.

“He was surprisingly enthusiastic about it,” Kudo told BuzzFeed last year. “He gave a lot of suggestions about where to shoot and other things.”

The resulting snaps, which look as though they’ve been ripped from a fashion magazine, have even earned the attention of the designers themselves.

Most notably, Heron Preston, co-founder of the popular street brand Been Trill, responded to one of the looks with three successive fire emojis. We’d say that about sums it up. Who says matching your date has to end after prom.

Tsuyoshi and Tomi Seki, a married couple in their 60s from Japan, have attracted a massive following with their Instagram account Bonpon511, where the style duo posts their co-ordinated looks accompanied with hashtags like #over60, #silverhair and #ootd (outfit of the day). The name of the account is derived from their childhood nicknames Bon and Pon and their wedding date. The stylish pair, who recently celebrated their 40th anniversary, are well on their way to a million followers with 826,000 to date.

Since creating the account, the fashion icons have published two books celebrating married life and have even launched their own range of clothes and accessories in collaboration with Japanese department store Isetan Mitsukoshi. Fashion aside, they hope to promote the idea that retirement represents the start of a second life — which is the subject of one their books and a principle they obviously follow, evidenced by the various backdrops in their photos.

“Now we’re on our own and finally have the time to do all the things we didn’t have the time to do when we were raising a family and working,” Tomi told The Guardian. “We want to show that retirement can be a lot of fun, especially if you find something you enjoy doing together.”

Sometimes the greatest style makers on Instagram aren’t “doing it for the Gram” at all.

Such was case when a dentistry student from Italy took notice of the glamorous older women of Milan and started documenting their style on a dedicated Instagram account called Sciuraglam. “Scuira”is Milanese slang for “rich woman,” and a scroll through the account reveals plenty of luxury, but the creator of the account, known only as Angelo, says the photos are about more than just designer logos and wealth. He says the women exude a certain inner beauty. “I really can’t describe it. Beauty is beauty,” he told British Vogue. Celebrities tend to have a little bit of a head start when it comes to attracting followers, but by all accounts Diane Keaton has earned every single one of her 940,000. When the 73-year-old actress joined Instagram in 2015, early followers got a window into her off-beat personality and passions, (including her widely shared affinity for golden retrievers and an odd clown obsession), but it was when she added a “today’s outfit” in December of 2018, that her follower count exploded. What’s most appealing about her presence on the app is how she embraces her age. The Hollywood star, who has openly shunned plastic surgery, isn’t heavy handed with her filters and wears little to no makeup.

She also proves that you’re never too old to explore new looks, sporting a variety of bold styes from menswear blazers cinched with a thick belt to baggy pants and bowler hats reminiscent of her iconic turn in Annie Hall in 1977.