Having Their Day at the Beach: Older Celebs in Swimsuits Who Cause Waves On Instagram 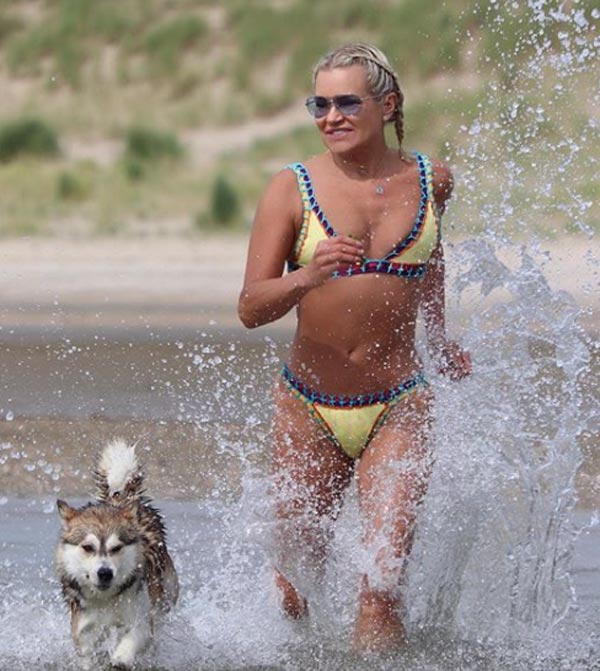 Women over fifty are having their day at the beach and sporting sexy swimsuits that show off their fit and fabulous bodies, putting an end to the notion that bikinis are for babes of a younger age.

These senior swimsuit sirens are not satisfied with merely turning heads on the beach blankets next to theirs. Proudly posting these bikini-clad pictures on Instagram ensures the entire world can see them, garnering a tidal wave of global admirers — or, in some cases, haters.

Some might argue that these older women — okay, the rich and famous — have the luxury to put in the time and effort required to have a body rivaling a teenager. But that’s all part of their gig. They have to look flawless at all times if they want to continue working at the Dream Factory also known as Hollywood.

Some might argue narcissism is part of it. But consider the benefits of keeping fit, healthy and in shape — which can lead to longevity for anyone regardless of starry ambitions.

As you scroll through the slide show of these age-defying beauties basking in the sun, bury the envy and seek inspiration. You have about 10 months until next summer to start getting into shape!

As you take in the taut body of this star from The Real Housewives of Beverly Hills, it’s hard to believe she’s given birth to three children and was also diagnosed with chronic Lyme disease in 2012. A former model from Holland, she passed on her good genes to all three of her kids. Daughters Gigi and Bella Hadid are currently the fashion world’s favourite models, and her young son Anwar has also recently stepped in front of the cameras.

She might no longer be a soap opera queen since All My Children was cancelled back in 2011 but she still  sizzles like a siren in this scarlet swimsuit. Her villainous character, Erica Kane, would approve.

This is literally her birthday suit. The award-winning actress celebrated her 60th birthday last summer dressed in a colourful print bikini as she indulged in some birthday cake.

The legendary model posed in a bikini recently during her summer vacation with her family at their Muskoka cottage. And she still looks like the bombshell she was back in the height of the supermodel-era of the 1990s. Concrete proof, if need be, that supermodels never fade into the sunset.

If you look at this Oscar winning actress’ Instagram account, you’ll notice many posts of her workout routines with her trainer. And she’s unapologetic about the amount of time and dedication she puts into keeping in top shape. As the caption which accompanies this picture from her 4th of July holiday states, “Today I’m thankful to have my freedom and live the life I choose and today that means swimming with my hat on!”

All five of her daughters are infamous for some outrageously sexy swimwear pictures on social media which shows off their voluptuously enhanced bodies. But the mother of the Kardashian clan knows that sometimes a great beach coverup over a bathing suit, can be just as alluring.

Holidaying this summer on the French Riviera, this Dame astonishingly still has the body to rock a bikini. But if ever there was a style guide written by Old School Screen Sirens, there would surely be a commandment that states, “Always protect the face darling!” While we’re almost certain her bikini-clad body is slick with sunscreen, this iconic actress double downs on sun protection when it comes to her famous visage by wearing a wide brimmed hat and oversized sunglasses — even when actually in the pool.

Holidaying this summer in the south of France, this former Bond girl, takes a cue from Dame Joan Collins: the must-have accessory for a swimsuit should be a big sun hat.