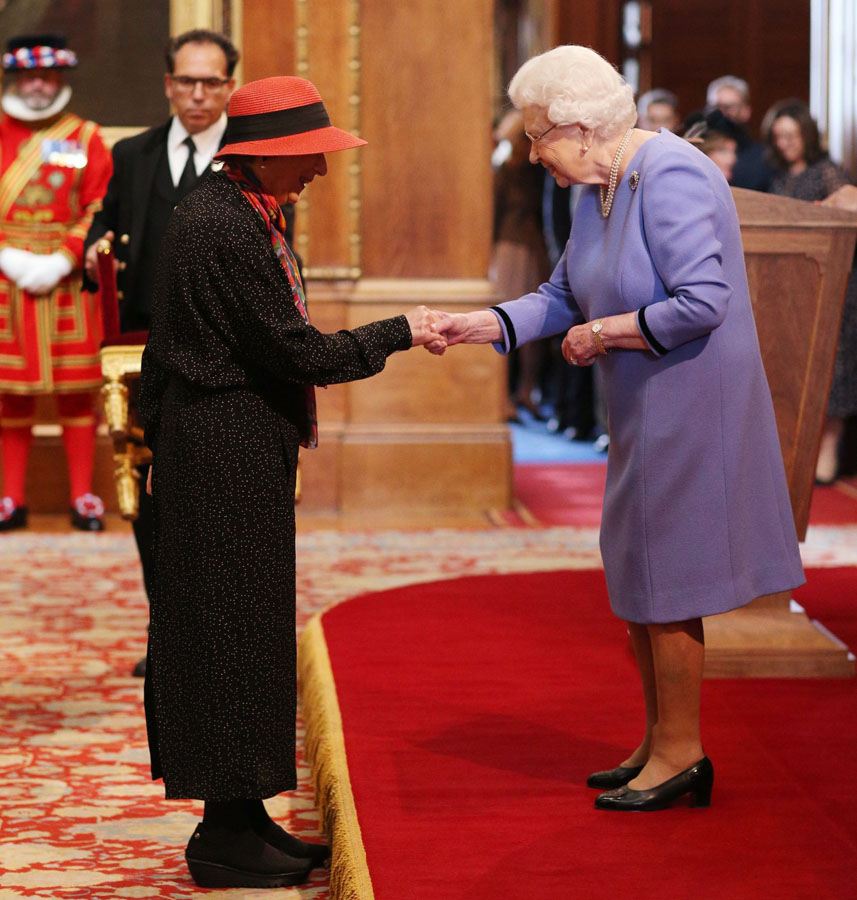 Two beloved Queens — a British royal and the Canadian Queen of Letters — converged at Windsor Castle on Friday, where Queen Elizabeth II bestowed Margaret Atwood with the prestigious Order of the Companions of Honour in recognition of her “services to literature.”

The monarch, 93, presented the award to Atwood, 79, in an exchange that was shared on the Royal Family’s Twitter page. The author later admitted that she felt “a bit emotional” during the meeting and told reporters, “When you see the Queen at her age and her schedule that she puts out, it’s an inspiration to everybody. You just keep going.”

The Order of the Companions of Honour was founded by Queen Elizabeth’s grandfather, King George V, in 1917 in recognition of citizens of the Commonwealth who achieved success in various fields, including the creative arts. And, as the Canadian Press notes, the rules state that only 65 honourees can exist at any given time. As such, Atwood joins a list of companions that currently includes the likes of Sir David Attenborough, Dames Maggie Smith and Judi Dench, Paul McCartney and fellow Canucks John de Chastelain (soldier and diplomat) and historian Margaret MacMillan.

The honour marks the latest accolade in Atwood’s  “Canadian invasion” of Britain, coming a mere 10 days after scoring her second Booker Prize win in London for her novel The Testaments — the sequel to A Handmaid’s Tale — which made the author the oldest Booker winner ever. She shared the award with author Bernardine Evaristo, and the pair enjoyed a tea reception with Camilla, Duchess of Cornwall at London’s Clarence House.

Atwood’s roll across the pond — nabbing two major honours in just under two weeks — follows her being shut out of two high-profile awards back home in Canada, where The Testaments failed to make the shortlists for both the 2019 Scotiabank Giller Prize and the 2019 Governor General’s Literary Award.

Still, Atwood’s unlikely to spend much time concerning herself with the Giller or Governor General’s Awards (she has previously won both). The Testaments broke Canadian first week sales records in September, the same month Atwood appeared on the cover of Time magazine amid the announcement that the book was being primed for the small screen by Hulu, which also produces the award-winning TV adaptation of her novel The Handmaid’s Tale.

And according to CBC, on the same day Atwood received the royal honour it was also revealed that she plans to donate half of her Booker prize money — which works out to approximately C$42,390 — to Indspire, a charity that provides scholarships and programs for Indigenous Canadians.