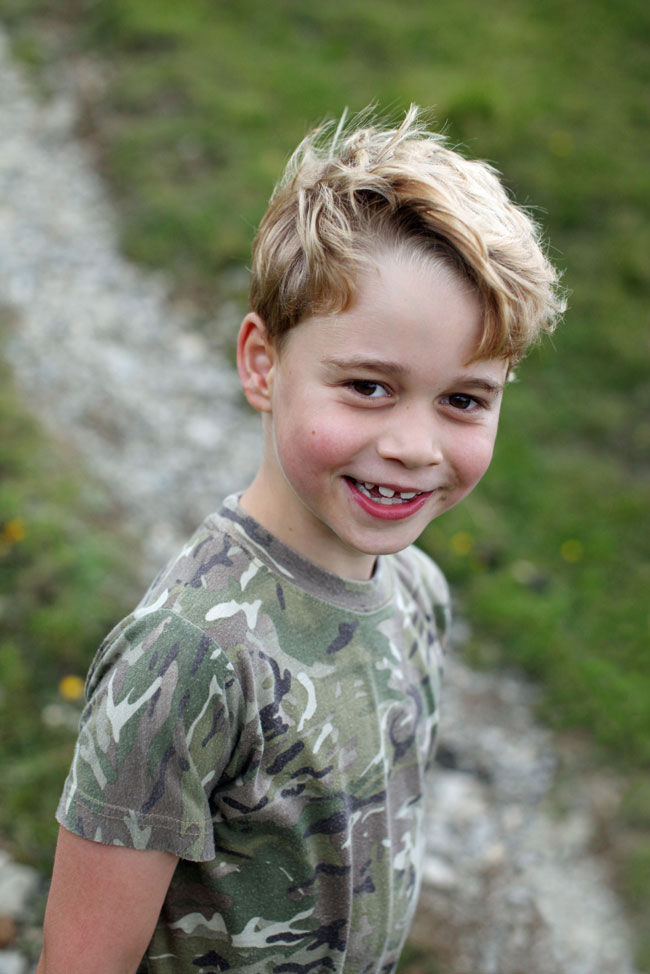 Britain's Prince George celebrates his 7th birthday on July 21, 2020. This picture is taken by his mother, Kate Middleton, earlier this month. Photo: The Duchess of Cambridge/Kensington Palace via Getty Images Handout

Happy seventh birthday, Prince George! While younger siblings Princess Charlotte, 5, and Prince Louis, 2, celebrated their birthdays this year in lockdown, the lifting of some coronavirus restrictions in Britain will allow George to reportedly enjoy a birthday tea party with family and friends at their home in Norfolk.

As is the tradition, mum and talented amateur photographer, Kate, the Duchess of Cambridge, has taken new portraits of the young royal to mark the occasion. In one, flashing a big grin for the camera, he is wearing a sporty olive green polo-style shirt from Mango (which costs just £7.99 or about C$14) and shorts, leaving behind the sweet Peter Pan-collar shirts we were so accustomed to seeing him in as a toddler.

In the next shot, the camouflage T-shirt, which is similar to military-inspired outfits Prince William used to wear as a child, seems especially appropriate considering the Royal Family’s close ties with the military and that as future king, George will one day inherit his great-grandmother’s position as head of the Armed Forces.

The Queen, 94, also shared one of photos on the official Royal Family Twitter account, along with this birthday message: Other royal greetings came from Prince Charles and Camilla, the Duchess of Cornwall via the Clarence House Twitter feed. George’s birthday also happens to fall on the same day that Prince Philip, 99, made his first public appearance in more than a year, where he turned over the role of Colonel-in-Chief of The Rifles to Camilla, Duchess of Cornwall. Prince George was last seen when the Royal Family released these adorable pics of the Cambridge clan on social media last month in celebration of Father’s Day and William’s 38th birthday. Earlier this year, Princess Charlotte’s birthday photos showed her and her family helping out during the pandemic by delivering homemade pasta and bags of groceries to retirees living in lockdown. And this past April, to mark little Louis’s birthday, the Duke and Duchess released photographs of their youngest child with rainbow-coloured paint on his hands. During the COVID-19 crisis, children in the U.K. had been painting pictures of rainbows and displaying them on their windows or drawing them in chalk on sidewalks as a message of hope to passersby that this storm, too, shall pass.

In addition to volunteering during the COVID crisis, the royal brood have been encouraged to show their appreciation of National Health Service (NHS) workers for their efforts in fighting the coronavirus. And the Royal Foundation of The Duke and Duchess of Cambridge is formally supporting Our Frontline, an initiative that brings together mental health charities to provide resources and support to front-line workers. Recently, Kate also helped launch a BBC education project called Tiny Happy People initiative, which helps develop children’s communication and language skills.

“I Think She Was Quite Impressed”: The Queen Talks With Jamaican Bobsleigh Team Member on Video Call