The Year In Politics: 5 Events That Shaped Canada’s Political Landscape in 2021 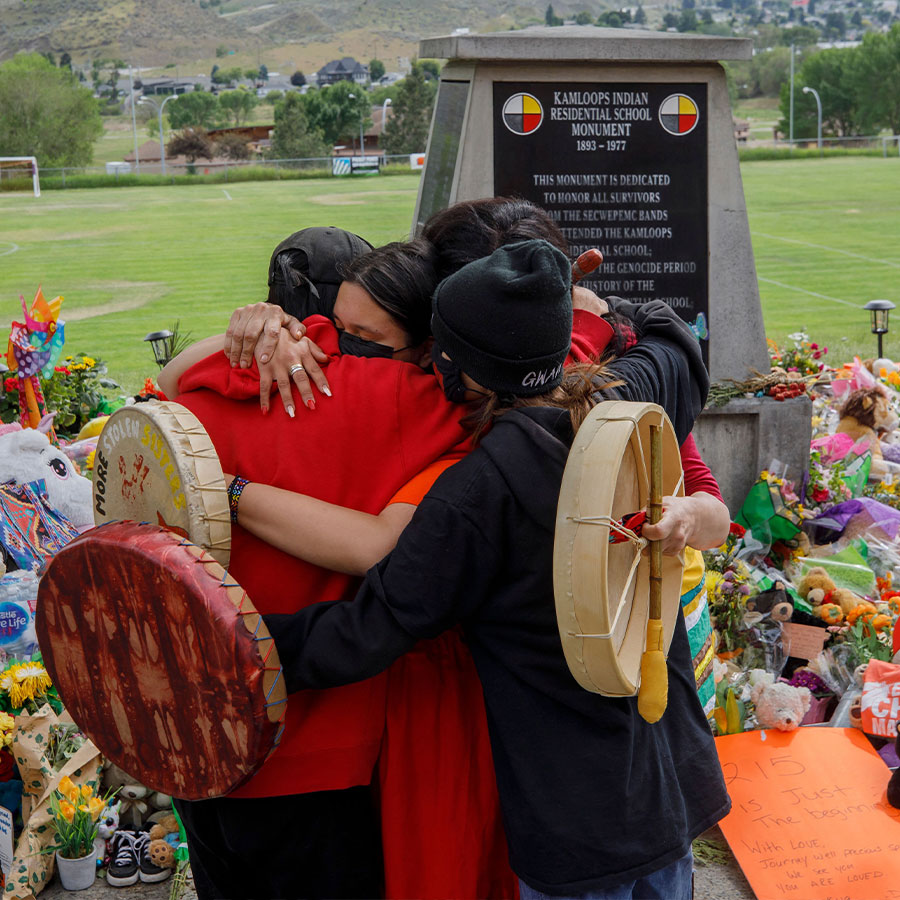 People from Mosakahiken Cree Nation hug in front of a makeshift memorial at the former Kamloops Indian Residential School to honour the 215 children whose remains were discovered buried near the facility in Kamloops, British Columbia, on June 4, 2021. Photo: Cole Burston/AFP/Getty Images

As 2021 draws to a close, we recap the five moments that shaped Canada’s political landscape.

Joe Biden, 78, was sworn in as the 46th President of the United States in January, becoming the oldest person ever to serve as head of the world’s top superpower. Alongside the new president was his running mate Kamala Harris, 57, the first Black, South Asian and woman to fill the role of vice-president.  Biden’s ascendancy to the White House ended the reign of Donald Trump, whose chaotic and controversial era concluded amidst the chaos that marked his four years in office — a riot in which thousands of his supporters stormed the U.S. Capitol buildings, ransacked offices, and set off explosive devices in an attempt to overturn the results of the November election.  Five people were killed in the riots, which shook Americans’ confidence in their democratic process.

The quiet, calm manner in which Biden handled the bumpy transition to power showed Canada that the new administration wouldn’t indulge in the same petty attacks and divisive rhetoric that typified relations between former president Trump and Prime Minister Justin Trudeau.

Under fire for not implementing stricter health measures to battle the third wave of COVID-19 that was tearing through Ontario, Premier Doug Ford held a press conference to apologize for his government’s fumbling approach to the pandemic. “We got it wrong,” said an emotional Ford, alluding to the outcry that ensued after the Conservative provincial leader rushed to enforce strict health measures (closing playgrounds and giving the police arbitrary powers) that were not backed up by his own health officials. “We made a mistake,” he admitted. Ford’s apology marked a reset in the government’s approach to battling the virus. This led to the June appointment of Rod Phillips as new minister of long-term care, replacing Dr. Merilee Fullerton. During the time Fullerton had served as minister, she had been heavily criticized for her inaction and missteps while presiding over a long-term care sector that was devastated by repeated waves of COVID-19, leading C.A.R.P. to launch a campaign calling for her removal.

Canadians reacted with horror and shame after ground-penetrating radar located the remains of 215 First Nations children in a mass unmarked grave on the grounds of the former Kamloops Indian Residential School in May. This horrific finding, which was repeated in Saskatchewan (near the former Marieval Indian Residential School, where 751 unmarked graves were found) and again in British Columbia (near the former St. Eugene’s Mission School, where 182 unmarked graves were found), touched off a massive outpouring of grief and anger among Indigenous groups and forced us to come to grips with our historical mistreatment of Indigenous children. It’s estimated that at least 150,000 First Nation, Inuit, and Métis children were forcibly removed from their families and placed in residential schools, which operated in Canada from the 17th century until the late 1990s. These government schools, which were run by religious organizations, were responsible for erasing any traces of Indigenous cultural, language and religious practices. On July 1, Prime Minister Justin Trudeau issued this plea to all Canadians: “This Canada Day, let’s recommit to learning from and listening to each other so we can break down the barriers that divide us, rectify the injustices of our past, and build a more fair and equitable society for everyone. Together, we will roll up our sleeves and do the hard work that is necessary to build a better Canada.”

On August 15, Prime Minister Trudeau visited Governor General Mary Simon requesting that she dissolve Parliament, paving the way for a Sept. 20 federal election. The election call, seen by Canadians as a cynical move calculated to shore up the Liberal Party’s minority government, was immediately dubbed as Trudeau’s “selfish summer election” by NDP Leader Jagmeet Singh. The snap election, which Trudeau tried to cast as a referendum on his government’s handling of the pandemic and its ability to lead the country into the post-pandemic era, was met with apathy by the voting public and, in the end, solved very little. The Liberals once again garnered fewer votes than the Conservative Party, under leader Erin O’Toole, but managed to return to Ottawa with another minority government. Trudeau’s failure to make any electoral gains in western Canada, which ultimately led to his failure to secure a majority government for the second-straight election, touched off a round of speculation about whether he would step aside as Liberal Leader and hand the reins over to Finance Minister Chrystia Freeland.

Michael Spavor and Michael Kovrig returned to Canada after being jailed by Chinese authorities for nearly three years. The “Two Michaels” were taken into custody by Chinese police in December 2018 in what was a blatant retaliation for Canada’s role in the extradition proceedings against Huawei executive Meng Wanzhou, who had been arrested by Canadian authorities on behalf of the U.S. The pair were detained in prison on trumped-up charges of spying on China and were finally released after 1,000 days once the U.S. agreed to halt its extradition proceedings against Meng, The ordeal the two men went through has changed relations between Canada and China forever, where financial ties between the two countries will no longer take a back seat to human rights. This culminated in Conservative Leader Erin O’Toole recently calling for a full boycott of the Beijing Winter Olympics, which are set to open on Feb. 4, 2022.