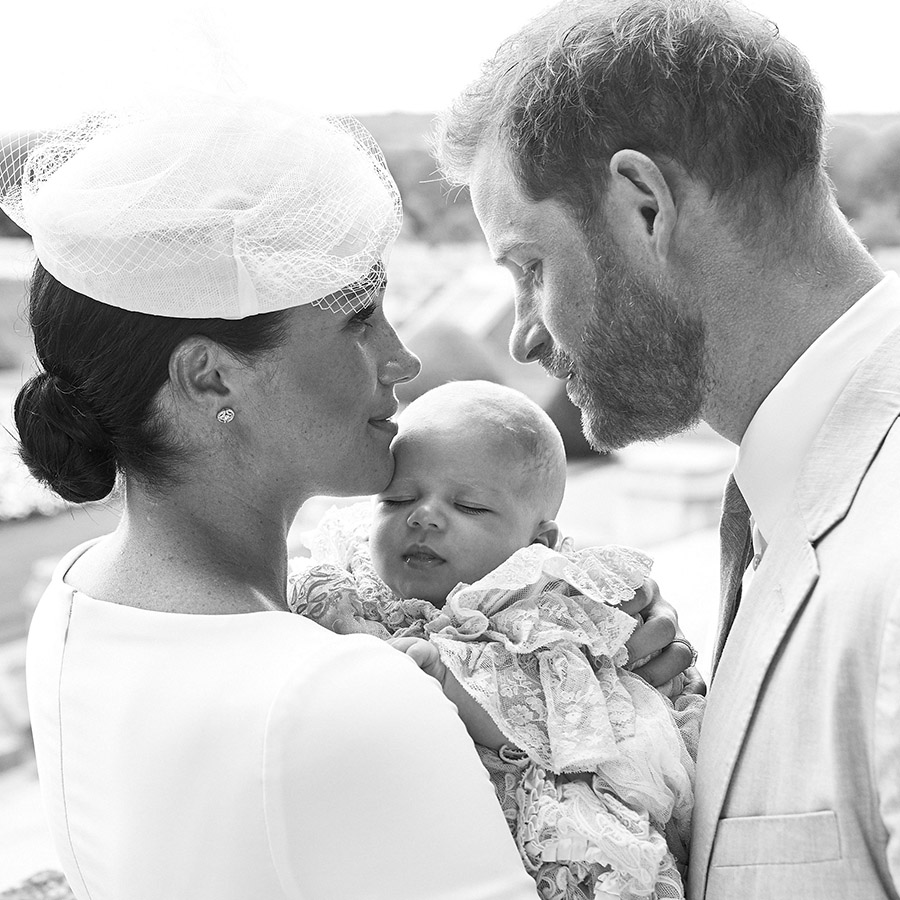 Archie Harrison Mountbatten-Windsor, the son of Prince Harry and Meghan Markle turns two on May 6, 2021. His official christening photograph (above) was taken at Windsor Castle with the Rose Garden in the background, 2019. Photo: Duke and Duchess of Sussex/GettyImages

The Duke and Duchess of Sussex released a new picture of their son Archie Harrison Mountbatten-Windsor as the toddler turned 2 years old on Thursday.

The sepia-toned image shows Archie from behind, wearing a sweater, jeans and sneakers, and holding a bouquet of balloons. The last time we saw Archie’s face was during a home video aired during the Oprah tell-all interview in March, where he was seen playing with his parents and the family dogs on the beach.

The photo, taken in the lawn of the Sussexes’ Montecito, Calif. home, was released on the Archewell non-profit organization site.

The photo was accompanied by an open letter from Meghan and Harry, calling for COVID-19 vaccine equality:

“We will not be able to truly recover until everyone, everywhere, has equal access to the vaccine,” the statement read. “And with that intention, we are inviting you to contribute whatever you can—if you have the means to do so—to bring vaccines to families in the world’s most vulnerable places.”

All contributions will be sent to Gavi, the Vaccine Alliance, which “buys COVID-19 vaccines for the world, prioritizing those who need them the most in countries that cannot afford them.”

Also to mark Archie’s birthday, Queen Elizabeth II and other members of the Royal Family took to social media to post their well-wishes. The toddler, who is seventh in line to the throne, has lived in California with his parents the Duke and Duchess of Sussex since they stepped back from senior royal duties last year.

The official Royal Family account, which represents Her Majesty the Queen, shared a photo of Harry and Meghan with newborn Archie at Windsor Castle. The caption read: “Wishing Archie Mountbatten-Windsor a very happy 2nd birthday today.”

Archie’s grandfather, Charles, the Prince of Wales, and Camilla, Duchess of Cornwall, shared a stunning black and white photo from Archie’s christening in July 2019. They wrote: “Happy birthday to Archie, who turns two today.”

Earlier this week it was announced that Meghan has written a children’s book, The Bench, which was inspired by Harry and Archie.

“The Bench started as a poem I wrote for my husband on Father’s Day, the month after Archie was born,” Meghan said in a statement Tuesday. “That poem became this story.”

The book, which is intended for children aged 3-7, tells the story of a special bond between father and son, as seen through a mother’s eyes. It will be released on June 8.

A love for books was also part of Archie’s birthday last year,when his parents released a video, filmed by Prince Harry, showing Archie on his mother’s lap as she read one of his favourite books, Duck! Rabbit! by Amy Krouse Rosenthal. The book was gifted to him by Oprah as part of a collection given as a “welcome to the world” present last year.

At that time, the Sussexes had only recently moved to the U.S. and were living in a mansion belonging to Hollywood legend Tyler Perry. Since then they have purchased their new home in Montecito and signed lucrative deals with Netflix and Spotify. As well, they have launched their philanthropic organization, Archewell.

We have also learned a little more about Archie, including his first spoken word. In an interview earlier this year with Late Late Show host James Corden — just one week after Buckingham Palace confirmed that Prince Harry and Meghan will not be returning as working royals — Harry revealed his son’s first word was, adorably, “crocodile.”

The royal birthday tributes for Archie come amid ongoing tensions between the Duke and Duchess of Sussex and their U.K. family, stemming from their decision last year to step back as working senior members of “The Firm.” Their relationship was further strained in March when Meghan and Harry participated in a tell-all interview with Oprah Winfrey, where they alleged one unnamed royal made a racist comment and, that Meghan’s pleas for help when she felt suicidal were ignored. Harry also revealed that his father, Prince Charles, refused to take his calls, adding that both Charles and his brother, Prince William were “trapped” in the Royal Family.

Last month, Harry reunited with his family to attend the funeral service for his grandfather, Prince Philip. While relations with some members of his family are reportedly “frosty,” Prince Harry was seen talking with William and Kate at the end of the service — the first time they have spoken in public since the Oprah interview. The scene, which was reminiscent of the days when Kate, William and Harry were a familiar threesome, gave many royal fans hope for an eventual reconciliation. Today’s posts for Archie’s birthday can help to further this goal, particularly with the relationship between Harry and his father and brother.

The brothers are reportedly working together for the upcoming commemoration to their late mother, Diana, Princess of Wales, which is scheduled for this summer for what would have been Diana’s 60th birthday in July. It is still uncertain, however, whether Harry will travel to Britain to attend the ceremony in person.