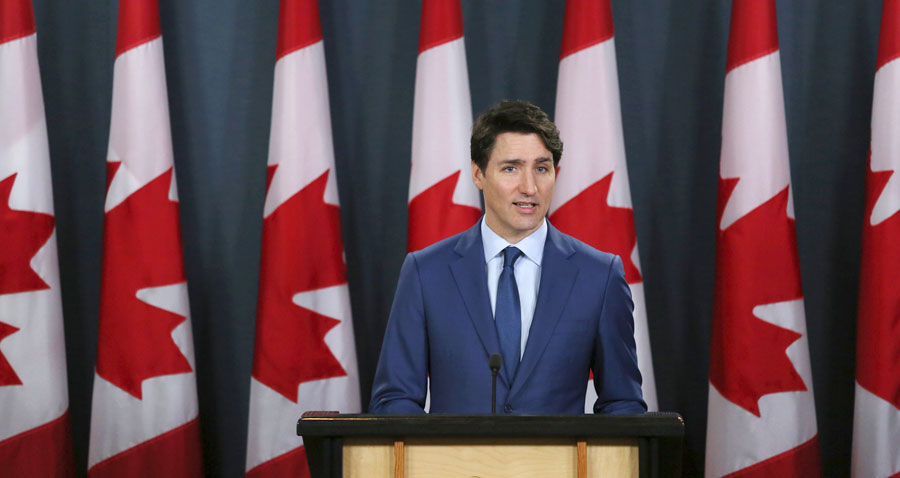 Pierre Trudeau famously took a walk in the snow before declaring his political career over, and this morning his son Justin Trudeau took a walk in the cold on Ottawa’s Wellington Street to the National Press Gallery, where after a month of the gathering storm that has seen two ministers and his private secretary resign, he finally addressed the nation on the SNC–Lavalin scandal.

It was a high-stakes moment for the prime minister, as his political fortunes and the fate of his Liberal party in the fall federal election hang in the balance. The fact that during his statement Trudeau took the rare step of invoking his father’s legacy as justice minister (describing the respect he has for the portfolio and its institutions as close to his heart) shows how much reassurance he knows Canadians need.

Still Trudeau refused to apologize when asked directly by a reporter if he was indeed offering one among his repeated statements on “many lessons to be learned” and ”reflecting on my leadership,” only admitting that he should have reached out to Jody Wilson-Raybould personally during the process and “I should have been aware of the erosion of trust “ while reiterating his position that if the former minister had concerns “She should have come to me. I wish she had” and that “there was no inappropriate pressure “ put on her.

Trudeau’s pivot throughout was to jobs and the economy, and he explained away one of the most explosive charges against him of bringing politics into the process when he told Wilson-Raybould that he was the member from Papnieau, that he said it in a manner that was not partisan and it is expected that he would be thinking of his constituents as all Parliamentarians should.

Later on he went on to say Canadians expect their government to think of the loss of jobs, pensions and the economy “separate from and addition to electoral concerns.” It’s a fine line and one that Trudeau will continue to walk as the ethics investigation looms over the ongoing SNC Affair Public Inquiry and as the Conservatives led by Lisa Raitt continue to apply pressure while pundits claim the questions he did not directly answer raise more questions.

At the end, the prime minister left the press gallery on his way to Iqaluit to offer the only apology he will today – to the Inuit community for their mistreatment during the tuberculosis epidemics of the 1940s, ’50s and ’60s.

For the full speech, see below.