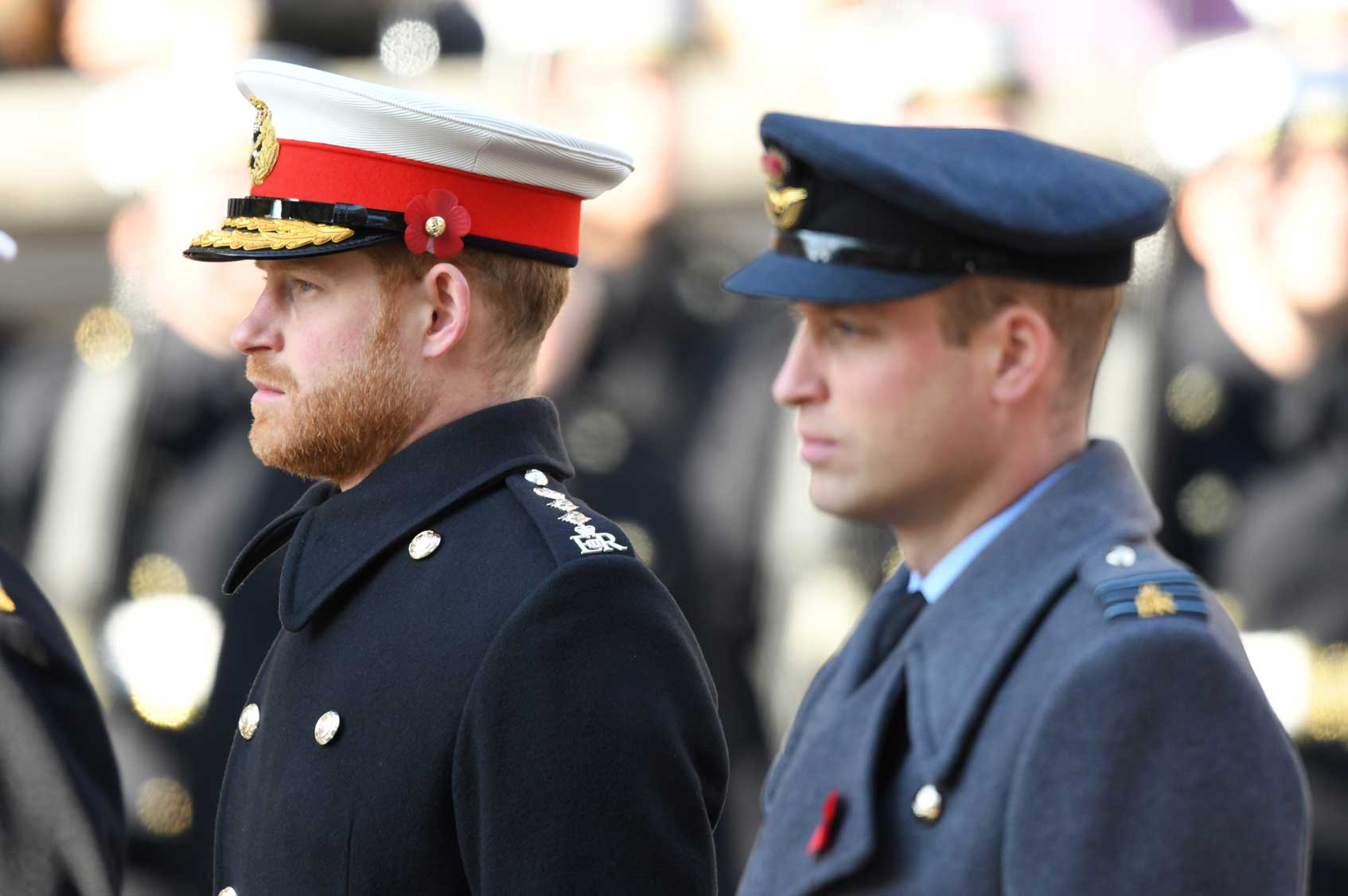 Prince William and Prince Harry at the Cenotaph in London for Remembrance Day 2019. Photo: Karwai Tang/WireImage

War of The Windsors

A new book from Robert Lacey, the royal expert who advises The Crown, tracks the Royal rift between princes William and Harry and explains why Diana’s boys were always separated by birth. / BY Shinan Govani / November 1st, 2020

Social distancing. Royal-style. Courtesy of his new book, Battle of the Brothers: William and Harry, The Inside Story of a Family in Tumult, historian Robert Lacey puts the travails of the last several years – where the Windsor clan is concerned – into a very specific locus. Instead of Harry and Meghan v. Everybody, or, gosh, Kate v. Meghan, his framing of the story is as old as the Old Testament: brother v. brother. He puts into context a tale that is, indeed, as vintage as Cain v. Abel, yes, but one that has nods to any number of sibling psycho-wars, like sisters Jackie O and Lee Radziwill or those two German brothers who founded Puma and Adidas, but famously feuded and divided a town. Lacey lays it all out here. Shuttling between past and present, he does a good job showing how we got to this present-day William-Harry stalemate: from the earliest days of the Diana scars to the bristled feelings when Meghan entered the picture, from the days of Harry’s wanton hard-partying to that era known as  “Waity Katie,” from their experience as the first “Internet Princes” to the bumbling of certain palace courtiers when it came to the negotiations over “Megxit.” Few stones are left unturned.

To delve further into the never-ending saga, and to hear some more about his latest project, we called up the author in London to dish.

Eye of the storm

“These boys are the products of the royal turmoils of the ‘80s and ‘90s,” Lacey began. “Both charismatic, but damaged.” He went on: “We thought those turmoils were resolved somewhat – albeit in a tragic way, when Diana died – but it has come to haunt us. My book is the story of chickens coming home to roost. It seems like William and Harry absorbed different lessons from the tragedy. Just think about how William made Kate do an apprenticeship of nine years, essentially, before their marriage, while Harry took the opposite tack. For him, love means all. Both saw their parents – what was an arranged marriage that turned loveless – and duty has won out in the form of William, while love, and its whims, has won out for his brother.”

On page 96, when tracing the thickening of those Charles-Di wars during the 1980s and 1990s, Lacey makes the point that William and Harry “grew up in the care of two parents who were not only not sharing the same bed, but who were more inclined to talk to the press than each other.” And speak to each other through the press, something William and Harry have learned to do to some extent now, I posit to the author. When asked to extrapolate on this, Lacey points to Diana’s famous “there were three of us in this marriage” Panorama interview with Martin Bashir. “That was the moment William was so tremendously hurt, that he becomes disillusioned. He refused to talk to his mother for some time after that.”

And also the moment…

“He transfers his emotions from his parents to his grandparents,” Lacey continues. “It coincided with the period he went to Eton – right next to, very close to, Windsor. He started those weekly Sunday lunches, those Sunday heart-to-hearts, with Grandma. To this day, it is his grandma who is his inspiration. And that is where the real power nexus lies, I believe – William and the Queen.”

The burden of the “spare”

“The system itself is very cruel to the spare,” Lacey reiterates to me. “They start as the co-star, but then it goes all downhill when duty takes over. We saw this with Margaret, too. We see it with Harry.”

One interesting what-if scenario Lacey paints in Battle of the Brothers comes via Charles and Diana’s decision not to name Princess Anne – Charles’s sister – as a godmother to either William or Harry. This, because of a low-grade frostiness between Anne and Di, was a decision that led to consequences when the latter died so young. “Just imagine if Anne had been serving as the princes’ godmother in the years after Diana’s death in 1997?” he asks. “Anne might well have operated alongside brother Charles as a more harmonious family unit for Harry (then 12) than anything the boy had previously known.” Furthermore, this: “Anne would have been the one senior royal on the same wavelength as Harry” when challenges arose in the future. Asked to elaborate, he tells me:  “The salient point is that Anne had already set up her children as, effectively, non-royals. She has shown how you can do it without travelling to Montecito, California.”

Lacey contends that the Queen, at one point, tapped her former Private Secretary Sir Christopher Geidt (one of her most trusted advisors, and the man assigned to work with Meghan, a signal of how much she wanted support the Duchess of Sussex)  “to frame a plan… to get Harry and Meghan out of the country for a decent spell” in order to  “give everyone a breather.” It was hoped a solution could be reached that would  “offer both honour and responsibility to the couple by handing them some sort of high-profile role in her beloved British Commonwealth of Nations – a highly prized token of trust – while trying to appease Harry and Meghan’s wish to live an ‘ordinary’ existence.” The plan was to send them to South Africa, although it ultimately fizzled.

Much was made of the non-verbal signals in the Queen’s annual Christmas broadcast in 2019, and Lacey, for one, buys into it. When the monarch opted not to display images of Harry, Meghan and Archie, her new eighth great-grandchild, it very much meant something at that point. According to Lacey, the Queen had had enough of the couple’s high-profile flouting of “The Firm,” and the last straw was their announcement, on a taxpayer-funded Royal Tour of Africa, of a lawsuit against The Mail On Sunday without clearing it with Buckingham Palace first. In the book, he writes: “Who does and who does not feature on the royal Christmas desk … showed who was in favour and who was not. …The Sussex family had been ‘non-personed’ as effectively as the Soviets non-personed Trotsky and Khrushchev.”

Giving a compelling play-by-play of the high-stakes, so-called summit in January to hammer out details of Harry and Meghan’s exit from their royal duties – Lacey has a good read on all the representatives in the room – he reveals that “William maintained his distance.” So much so, “the Queen had suggested the family should gather for lunch before their big powwow in the library that afternoon, but he refused his grandmother’s invitation.” He only wanted to talk business with Harry, the book says, citing friends of William’s who said he felt he was unable to “endure the hypocrisy of smiling at him over lunch.”

The big difference between now and 1936 – when Edward VIII abdicated the throne for love – is social media, Lacey concludes. With Harry and Meghan’s @sussexroyal Instagram account nipping at the heels of William and Kate’s @kensingtonroyal, William was in the lead with 12 million followers to Harry’s 10.6 million before Harry and Meghan had to abandon the Sussex Royal brand as part of their exit deal. Both relevance and visibility flowed from these rival, online courts.

“It has given Harry a platform, beside Meghan, which makes membership in the Royal Family somewhat irrelevant,” he goes as far to say.

Next big date to watch

Circle July 1, 2021 on your calendars, people! That is when William and Harry are expected to very publicly reunite, as per a Kensington Palace announcement made a few months back. That is when the long-awaited statue of their mother is to be installed inside the Sunken Garden of the London palace. The date coincides with what would have been the 60th birthday of the Princess of Wales. “Presumably, Charles will be there. Presumably, Camilla will not,” Lacey quips, adding that all eyes will be on the brothers. “Will they seem genuine? Or are they putting on an act? For if it all just becomes about putting on an act, what is to separate it from just being showbiz? If it is just showbiz, that, eventually, is the death of the monarchy.”