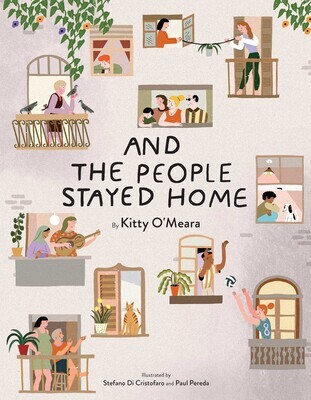 A drawing of an apartment building with people sitting in the windows talking, playing guitar and playing.

When the pandemic hit in March, a retired teacher and former hospital chaplain named Kitty O’Meara sat down with a notebook in Madison, Wisconsin, and tried to make sense of it all. She wrote a 113-word prose poem called In the Time of Pandemic, known by its first line “and the people stayed home,” and posted it to her blog and Facebook account. Her friends shared it and their friends shared it and friends of friends of friends shared, until it snowballed into a global sensation that had Oprah Magazine declaring O’Meara, 65, “the poet laureate of the pandemic.”

“There were many years of life that writing wasn’t the joyful experience that I’d hoped,” O’Meara told OprahMag.com in September. “To have something at the end of it, that is, I hope, a gift to the world — the whole thing is a pure blessing.”

Fast forward to December, and the poem has been translated into 20 languages, recorded as a song, made into an opera, published as a kid’s book on Nov. 10 with an animated version narrated by Kate Winslet, and included in an American anthology called Together in a Sudden Strangeness: America’s Poet Respond to the Pandemic. O’Meara has now copyrighted it and signed a deal to produce another children’s book even as she works on two novels and more poems.

Of course, one of the things people did when they stayed home was read books, of course.